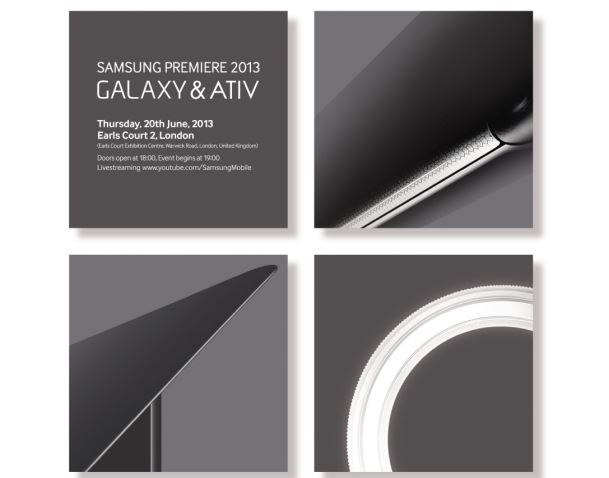 The “Samsung Premiere 2013” event is scheduled to take place in London on June 20 and we’re expecting to see at least a few new additions to the GALAXY and ATIV lines from the company. The invite doesn’t say much, but it does showcase the GALAXY and ATIV branding, as well as what appears to be the edge on a tablet or notebook-like device.

Starting with the Galaxy side of things, it is likely that Samsung will show off a few variants to its recent Galaxy S4 smartphone. The S4 mini has been rumored for some time and Samsung could go in the other direction with the S4 Mega as well. We’ve also see leaks on a Galaxy S4 Active with physical menu and back buttons, plus a more ruggedized back. It’s also possible that the event will see a new Galaxy Tab 3 in the 10.1-inch variety.

Switching gears to the ATIV side, Samsung hasn’t had as much success with its Windows-based smartphones and tablets compared to its Android offerings. That being said, given the company’s history, it’s very likely that we’ll find a new ATIV device styled after the Galaxy S4, except the smartphone will be powered by Windows Phone 8. Since the ATIV line also includes all-in-ones and laptops, we could see something there as well.

The Samsung Premiere 2013 event will be livestreamed from the Samsung Mobile YouTube channel on June 20th starting at 1pm ET.