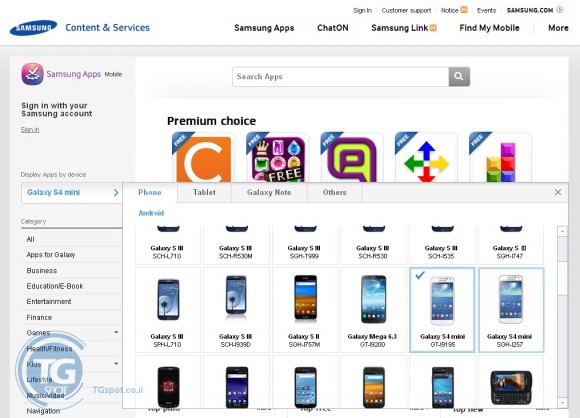 Just as Samsung followed up the Galaxy S3 with a Galaxy S3 mini, the smartphone company is doing the same thing with the Galaxy S4. The rumors about this upcoming mini smartphone had been swirling for a while, but now we’ve received confirmation from Samsung that the S4 mini will come in two different versions.

The Samsung GT-I9195 and the SGH-I257 showed up temporarily on the Samsung Apps site. They were subsequently pulled, as Samsung didn’t really intend on announcing the “surprise” smartphone until their “Premiere 2013” event in June, but screenshots were taken before the phones disappeared from the site.

Both phones are expected to come in both black and white and both phones will come with a smaller 4.3-inch Super AMOLED display running a 540 x 960 resolution. Power comes by way of a 1.6GHz dual core processor, Android 4.2 Jelly Bean and a 2100mAh battery, backed by an 8MP camera and 32GB of storage. The LTE version gets 2GB of RAM, while the 3G model gets just 1GB.

In short, the Galaxy S4 Mini is sounding an awful lot like having an S3 stuffed into a 4.3-inch body styled after the S4. Would something like this interest you?