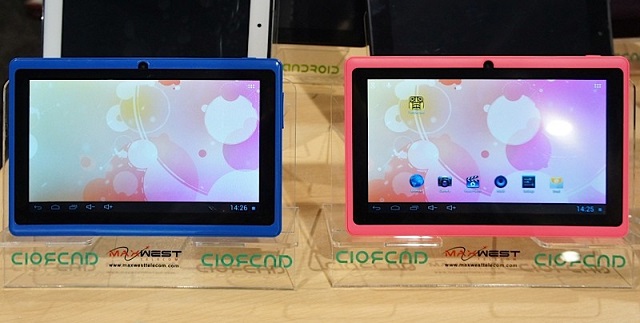 The popular 7-inch Android tablets currently out there such as the Google Nexus 7 are quite affordable. But here’s something that’s for those of you who are on a very, very tight budget. The Maxwest TAB-7155DC (aka Ippo Y88) is an Android 4.1.1 tablet which costs just $65, and it’s being shown off at CTIA 2013.

But, as you might have guessed by now, that very low price tag certainly doesn’t mean a high end machine. It features a 7-inch 1024 x 600-pixel capacitive multitouch LCD screen, which apparently is coming with poor viewing angles and is not covered with glass but a scratch prone acrylic cover.

There’s a 1GHz dual-core Cortex A5 CPU with Mali 400 GPU, 512MB of RAM, 4GB of built-in storage (microSD support is there), front and back VGA cameras, WiFi b/g/n and a 2800mAh battery. But no Bluetooth or GPS radios. And you will also find micro-USB port (with on-the-go), mini-HDMI output, and a 3.5mm headphone jack, along with microphone and speaker. The device will be available in black, white, silver, red, blue and pink.

The slate will give you access to the Play Store and its build quality and performance appear to be quite decent for that much money. But these very cheap tablets usually arrive with a ton of problems. We suggest going for the 7-inchers from Acer or Asus. There are also really cheap Hisense tablets that have beefier specs for around $99 and $150 (depending on model) that are soon making their way over to Walmart.