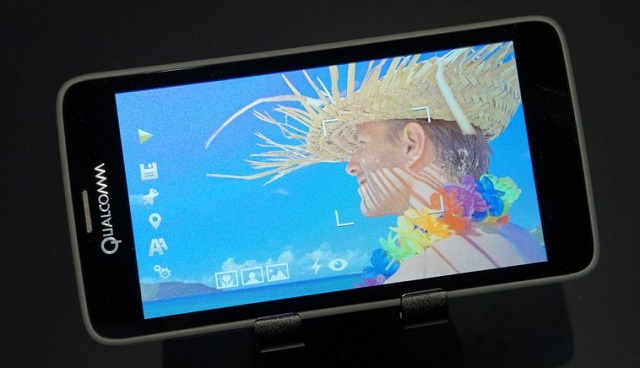 It’s been a while since we last heard about Qualcomm’s Mirasol display, but it’s still alive and the company has showed off their MEMS-based reflective display at SID Display Week. Included in the demo were a 5.2-inch panel with a resolution of 2,560 x 1,440 and 577 ppi on a smartphone and a 1.5-inch panel on a smartwatch, although the displays were just mock-ups.

According to a representative, the display is expected to come out with third-party devices. The main advantage of the Mirasol screen is its energy efficiency, having 6 times power advantage over LCD and OLED displays, which means you if a smartphone arrives with Mirasol tech it could go without charging for quite a number of days. But Mirasol requires an external light source (not backlight like an LCD).More R&D is still required for the tech so don’t expect it to show up on any devices anytime soon. For now, Sharp’s IGZO tech seems to be the best thing out there.

“Each Mirasol pixel is composed of three subpixels: red, green, and blue. Each subpixel is a simple structure made up of two films that are separated by an air gap. When the air gap is open, the subpixel reflects light at a specific wavelength; when current is applied to the two films, they pinch together and the air gap closes, turning the pixel nonreflective (black).

Like an E-Ink pixel, each Mirasol subpixel is bistable, meaning that it’s stable in either the “open” or “closed” states, and it requires power only to switch states; this bistability gives it its low-power characteristics. State switching is fast, on the order of a few microseconds, which is why Mirasol can do video”.

Check out the video, which comes to us courtesy of Engadget, to take a closer look at Mirasol.