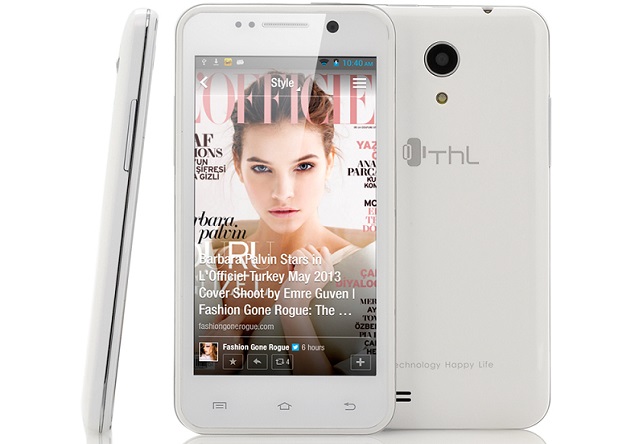 Today’s smartphones offer multi-core configurations, tons of RAM and are considerably more powerful than the PCs of late 90s and early 2000s. Unfortunately, they are also very expensive.

You look around and see tablets coming in at ridiculously cheap prices with mainstream brands going as low as around $150-$200, and lesser known brands hitting sub-$150 pricing. Wish the same could be said for phones? It can, as seen with the new ThL W100, a quad-core smartphone with an extremely affordable $170 price tag.

The catch with the W100 is that it is designed for the Chinese market, though getting in shipped internationally isn’t all that hard, just check out reputable sites like Chinavasion. As for the actual specs, the ThL W100 has a 4.5-inch display with a 960 x 540 resolution, a 1.2GHz MTK6589 quad-core processor, 1GB of RAM, 8MP rear cam, 5MP front cam and comes with Android 4.2 (with Google Play support).

The phone also has tons of sensors (proximity, light, etc), microSD, dual-SIM support, Bluetooth, GPS, Wi-Fi and support for 2G 850/900/1800/1900MHz and 3G 850/2100MHz. Probably the biggest downside for the handset is it only has 4GB internal storage. Luckily, the phone has microSD and has a special settings option that allows you to designate the external storage as the default write location.

The phone isn’t perfect, but for those of us looking for quad-core performance and reasonably high-end features without signing a contract, this could be a perfect way to do it without spending a fortune. As for the brand? You might not know ThL, but it is actually quite popular in China, with over 340 retail locations. In other words, this isn’t some no-name operation that will disappear overnight.