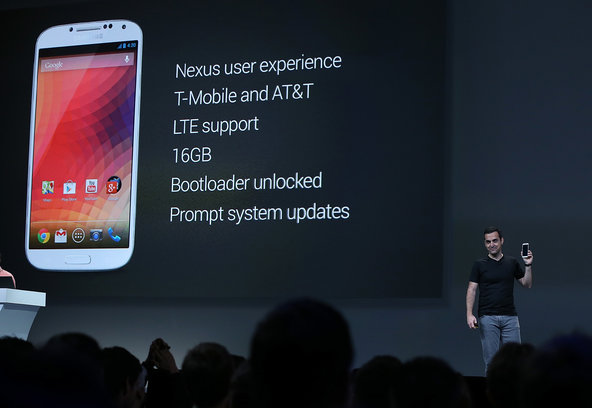 This year’s Google I/O keynote didn’t see hardly anything in the way of hardware announcements, but it did see one very interesting development: the announcement of a Samsung Galaxy S4 “Google Edition”.

This new version of the Galaxy S4 will be sold unlocked through Google Play, and will run on a stock version of Android – ditching Sammy’s TouchWiz UI and custom S4 software. The idea here is that you effectively get a Nexus device, which means that you will get the latest and greatest versions of Android directly from Google at a much quicker pace.

It also means that some of the customized features on the Galaxy S4 won’t work, as they rely on the TouchWiz UI. Still, for those that absolutely love a pure vanilla Android experience, this could be their dream phone.

Unfortunately, it might be like a Nexus – but there isn’t Nexus pricing here. The 16GB Galaxy S4 will sell through the Play Store for $649. While the Nexus 4 sold like hotcakes, part of its success was that it was dirt cheap relative to the specs that the phone packed.

Considering there are devices that aren’t much weaker than the S4 (like Nexus 4) but considerably cheaper, this might be a hard sell except for those that absolutely want the most cutting edge hardware or are big Samsung phone fans that happen to dislike TouchWiz.

So when is it coming? The phone will arrive to Play on June 26th and will only be sold in the United States. Additionally the phone will have LTE and will work with both AT&T and T-Mobile.

More than likely this will be the same Snapdragon 600 version sold by carriers, but how cool would it be if the Google Vanilla version of the S4 instead ran on the Exynos processor? What do you think of the S4 Google Edition, would you pay $650 outright for it?