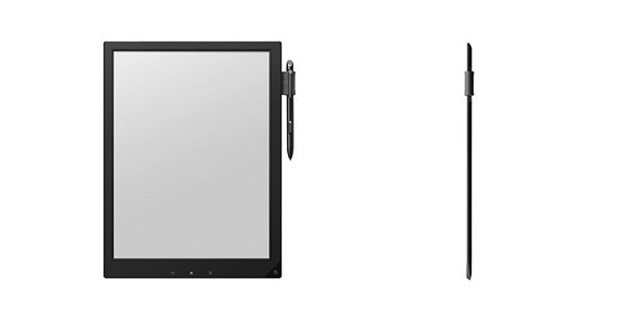 Large-screened E Ink devices have been tried by many companies in the past but none managed to gain ground on the academic market. Sony is also not a new player, but they are still trying their luck. Their latest product is a 13.3-inch flexible E Ink prototype device which is targeted at students and offices.

The device is coming with the new Mobius e-paper display technology with lightweight, shatterproof or rugged characteristics. With this new tech, Sony can make bigger display sizes without making the reader too heavy.

The slate measures in at 233 x 310 x 6.8 mm and weighs just 358 g, and it’s coming with 4GB of on-board storage (with a microSD slot) and a 1200 x 1600 resolution screen that’s an electromagnetic induction touchscreen, which allows you to do page swipes and menu selection. It also supports stylus input for making notes. And there’s WiFi for sharing notes, and its rechargeable battery is said to last for three weeks (with the wireless tech turned off), but the device currently supports only the PDF file format.

The device will be trialed at three Japanese universities, after which the final product will be available on the market but that might take a year or more.

But the question is whether this device will be appealing since there are many tablets out there with fast processors and high-resolution screens, as well as third-party apps. Sony’s own Tablet Z is one of the many options currently available. But if the price is not too much (the Sony Reader PRS-T2 costs $129.99), this new e-reader could be useful for many.