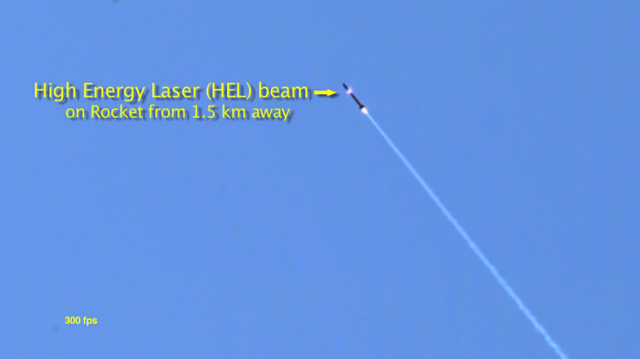 What you see above is a laser beam striking and tracking a point at the front of a rocket to destroy it mid-flight. The beam is from Lockheed Martin’s newly developed ADAM high energy laser (HEL) system which is taking out that rocket from a range of 1.5 km, as you will see in the video below.

The rocket is completely destroyed as you can see in the image:

ADAM or Area Defense Anti-Munitions is a system capable of nullifying attacks from unmanned aerial vehicles or rocket attacks from the ground. It can track short-range target from a distance of 5 km to destroy it when it’s in a range of up to 2 km. It could be very useful for protecting assets like military bases near the battlefield.

The video shows an ADAM prototype destroying a “Qassam-like” rocket. You will be able to clearly see the laser striking and tracking the rocket to eventually take it out.

It’s, of course, being developed to protect humans and military stuff from missiles, but why should they fire a rocket in the first place. It’s sad to remember that this will deal mostly with war. Why don’t they develop and keep this tech for some good use in the future, like helping NASA and Harry Stamper to take care of an extra-terrestrial threat.