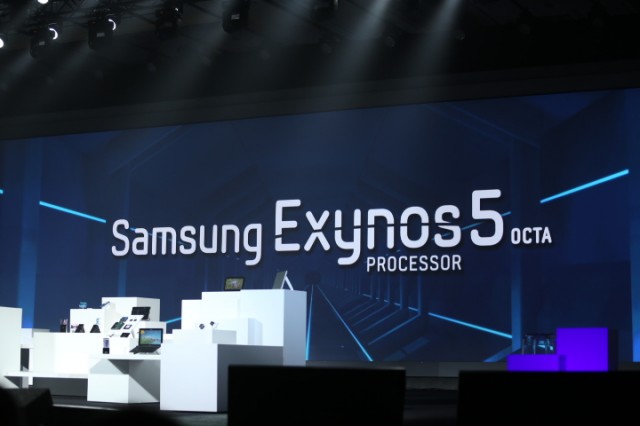 Samsung’s latest and greatest smartphone, the Galaxy S4, is currently available in two versions, one with a quad-core Qualcomm Snapdragon 600 processor and another with the South Korean company’s own Exynos 5 Octa with 4 Cortex-A15 cores and 4 Cortex-A7 cores. With the Exynos 5 Octa, Samsung promises energy efficiency by switching between battery-saving Cortex-A7 and the high-performance Cortex-A15 cores. But it appears like the S4 is not using the best possible way to do the shifting.

You can see how things work with the Octa below.

The image that you see below shows how the cores should be working. 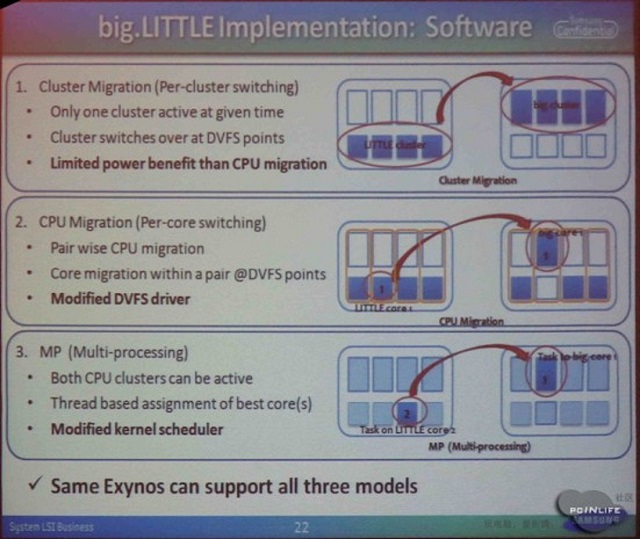 According to Developer AndreiLux, the Galaxy S4 currently switches all 4 cores between the two processors like a cluster rather than using core-pair shifting. The device appears to have arrived with lower level firmware.

“Basically there are three modes of operation of big.LITTLE:

Cluster migration: When load rises, just like when a phone increases its frequency per DVFS, all the cores will jump from the LITTLE processor to the big one. You either have 4 A7 cores or 4 A15 cores online.

Core migration: When load rises, it will only jump those cores from the LITTLE processor whose load exceeds the capacity of the A7 cores: You can have a single A15 online with 3 A7′s on. Or any other combination of a total of 4 processors.

HMP (Heterogeneous Multi-Processing): This is a vastly more complex working mechanism, and its implementation is also an order of magnitude more sophisticated. It requires the kernel scheduler to actually be aware of the differentiation of between the A7 and A15 cores. Currently, the Linux kernel is not capable of doing this and treats all CPUs as equals. This is a problem since we do not want to use the A15 cores when a task can simply be processed on an A7 core with a much lower power cost”.

So when the A15 cores are activated, the battery will be killed faster. This might explain why some people are experiencing heating and battery drain problems with their S4s. But hopefully Samsung will release a software fix soon that could make the S4 more power efficient.

Head here if you are interested in reading more details about this find.

What are your thoughts about all this? Do you have plans to buy the S4? If you are using the device now, are you having power issues?