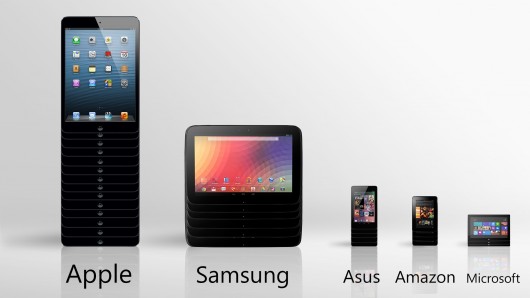 Apple is still top dog when it comes to tablet market share, a pretty impressive feat for a company with only 2 tablet models to choose from, however they aren’t sitting quite as pretty as before as their share has slipped while rivals begin to catch up.

When the ‘tablet wars’ kicked off, the Apple iPad seemed all but unbeatable, but times have changed and the iPad mini came a little late to the party giving the likes of Samsung, Amazon, Asus and others the chance catch up with their pint-sized offerings. The shift in market share is quite dramatic with Apple slipping from a 65% share at the start of 2012 to just under 40% this year. In second place Samsung enjoys a 18% market share, with Asus and Amazon making up the rest and Microsoft coming 5th with 1.8%.

From what we have been seeing Apple’s share will continue to slip unless they really do something special with the iPad 5 and iPad mini 2, but even then it won’t be easy, as a new Nexus tablet is expected soon, along with more Samsung tablets on the way.