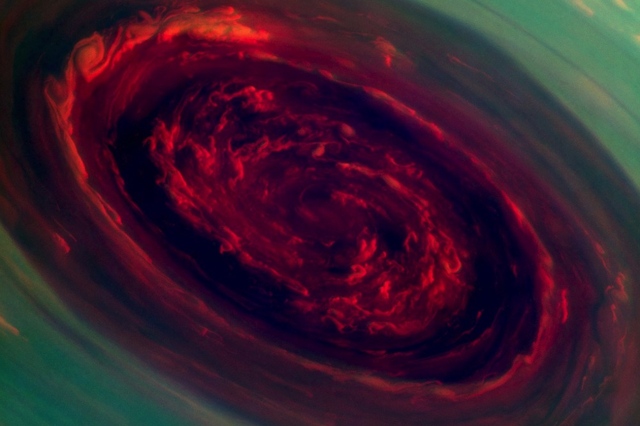 In 2009, winter ended at Saturn’s North Pole and began to let sunlight in to brighten up the place. It was then that scientists discovered that there was a massive hurricane in the region. Three years later, in November 2012, NASA’s unmanned Cassini spacecraft moved into position to capture images and video of the storm.

What you see above is a false color image of the hurricane, with the color red corresponding to low clouds and green to high ones. It has cloud speeds of up to 330 miles per hour and its eye is 1,250 miles wide, which is about 20 times the size of an average hurricane on our planet. But they do not know for how many years it’s been active.

Scientists are wondering how such a hurricane exists on Saturn with just small amounts of water vapor. Their study will certainly shed more light on how storms are formed here on Earth.

So, that’s a hurricane the size of Australia. You think that’s big? You clearly haven’t heard about Jupiter’s Great Red Spot, which is a storm two to three times the size of Earth.

What did you think of the videos above? Pretty fascinating stuff, wouldn’t you say?