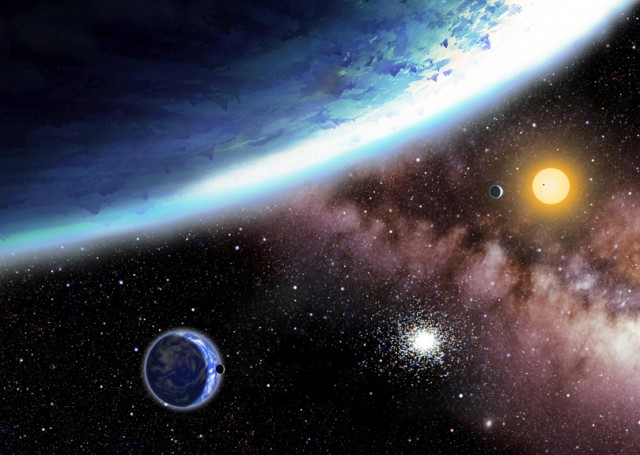 Astronomers love to look for liquid water on other planets. The reason for that is not the need to find a place to drop by to quench our thirst in between future space travel, but water is one of the essential ingredients of life on our planet. So, if an exoplanet is in the habitable zone (far enough from the host star to be cool enough for liquid water to exist, and not too far that there is only ice), life could exist on it.

Kepler has found two such planets in the new Kepler-62 exosolar system. These planets were not seen directly, but the astronomers came to the conclusion that they existed after noticing the dimming of their host star at regular intervals.

The astronomers are saying that these planets are most probably solid rather than molten and are at a correct distance from the host star to support liquid water.

Among these new planets Kepler 62-e (1.61 Earth radii) is in the “empirical habitable zone”, which means that it should be cooler than Venus. But Kepler 62-f, which is just a bit larger than Earth at 1.41 Earth radii, is inside both the calculated and empirical habitable zones. 62-f is at that distance from the Kepler 62 star, meaning that it could have splashing water at the surface.

But whether or not there is life out there is the question. That most probably won’t be answered any time soon. Do you find the thought about life on other planets exciting?