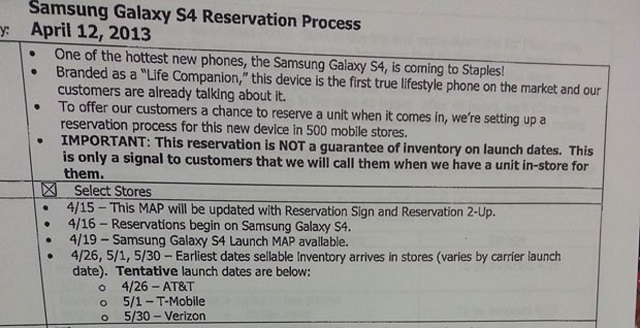 The long awaited Galaxy S4 was introduced a month ago by Samsung, but people are still playing the waiting game as there hasn’t been any confirmation regarding the release date of the device on any carrier. The good news is that we won’t have to wait too long, at least if we are to believe the leaked document from Staples that you see above.

The leak suggests that the S4 will be available from AT&T on April 26, T-Mobile on May 1, and Verizon on May 30. Of course those launch dates are “tentative”. There is no mention about the S4 model on the Now Network and no pricing details for the handsets sold at Staples. As for T-Mobile? The ‘uncarrier‘ earlier confirmed that they will make the Galaxy S4 available on May 1st.

Meanwhile, another leak says that Walmart will start taking pre-orders for S4 on April 16th. No hints on which carriers are involved, but Walmart currently offers the S3 on Verizon, AT&T, Sprint and T-Mobile.

In short, the wait for the next big thing is almost over. Are you anxiously awaiting the Galaxy S4? If not, what handset holds your fancy instead?