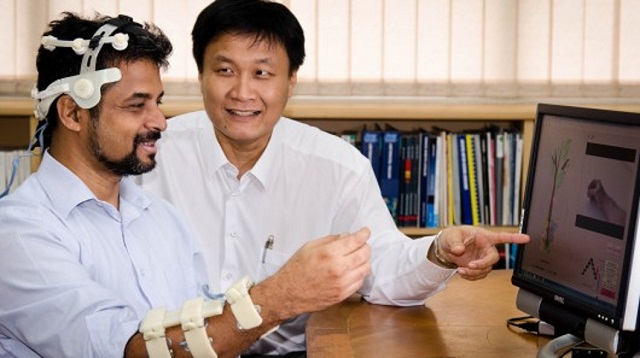 Rehabilitation for recovering from strokes can be frustrating for the patients. Their hands might not move in a way they wish, but now a new system called Synergistic Physio-Neuro Platform (SynPhNe) being developed by Dr. John Heng and his PhD student Banerji Subhasis at Singapore’s Nanyang Technological University. The new method seems to be better than conventional therapy in helping stroke victims.

SynPhNe (“symphony”, in case you are wrestling with the word) works by guiding patients through exercise and it also monitors them via a headset and an arm band, which are connected to a computer. When a patient fails to mimic an on-screen arm action SynPhNe shows why he or she is unable to perform the task. This is done via the headset’s neural sensors which keep track of brain activity and the sensors in the arm band which monitor the arm’s muscular activity. With the knowledge about the problem, the patient can then try to self-correct the action.

Here’s a bit more about it in the words of Banerji Subhasis:

“For example, if a patient wants to move his wrist, but his wrist is not moving, SynPhNe will be able to show him that his mind had sent out a signal, his muscles have received it, but because supporting and opposing muscles are clenched, he will need to relax the opposing muscle in order to move his wrist. Another common problem is that the patient may feel stressed while undergoing therapy, which affects his muscle control. So by showing the stress level on the screen, SynPhNe will teach the patient how to control his breathing and posture to regain his balance and composure so that he can continue with the exercises”.

Improvements have been shown by ten patients who used the system, and its makers are planning to test it on 50 other people. Their plan is to form a start-up company and make the system available for in-home use.