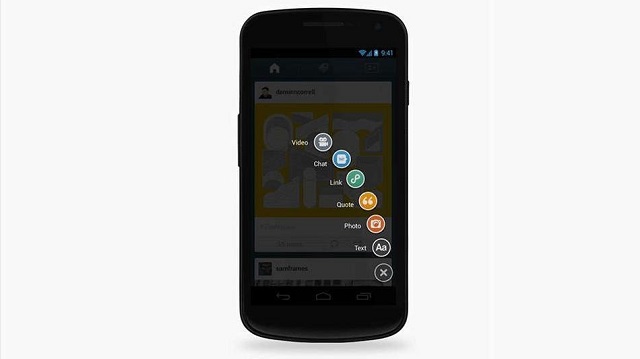 Tumblr is gaining popularity faster than ever before and it’s certainly a good idea to make things easier for its users. Aiming to make the Tumblr Android app clean and easy to use, they have released an update for it which comes with a redesigned interface and a “post anything” screen.

The new “post anything” screen allows you to share videos, chats, links, quotes, photos and text with just a single tap. The new version also allows you access to advanced controls such as saving drafts, queuing posts, and customizing tweets. And the entire look follows Google’s Holo design rules.

So far users seem to be satisfied with the arrival of the update, although there are a few complaints about refresh happening every few seconds automatically and problems getting gifs to load.

No word on an update for their iPhone and iPad apps. But it was about a year ago that they released a major update for its Android app and a month later they launched an iOS refresh. So, an iOS update might arrive sometime in the coming months.

What do you think about the new look? Are you having any problems?