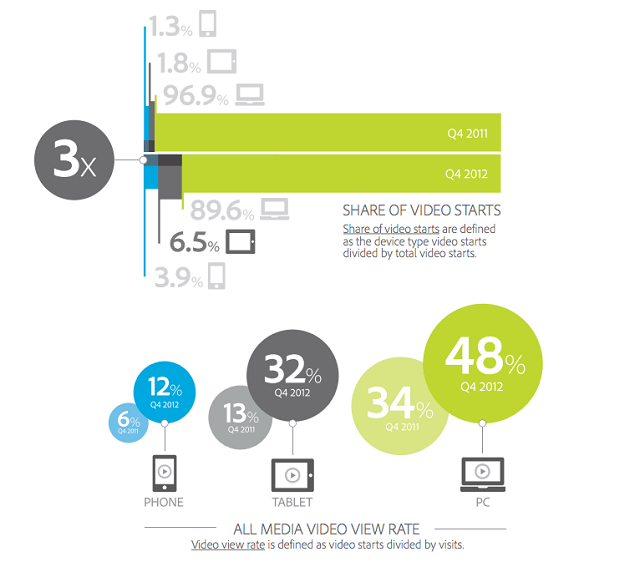 Online video is gaining more popularity at a faster rate and the proof for that are the numbers released by Adobe. The company  monitored video performance throughout 2012 across digital platforms and their study suggests that desktop is still dominating online video views, but there has been a massive increase in mobile viewership.

According to Adobe, Digital video has grown across all platforms. There has been an increase of 30 percent year over year in the fourth quarter of 2012 and video streaming has grown 50 percent since Q1 of 2011. But more interesting are the numbers regarding mobile video consumption. Mobile video starts now account for more than 10% of total digital video starts. And viewing on tablets is increasing at a faster pace when compared to that on smartphones.

This growth in mobile audience is certainly a big opportunity for publishers as they can now try to get more users to engage with online ads, but an ad format that works best on mobile devices is yet to be found out. Mid-roll and post-roll ads appear to be more successful on mobile platforms when compared to pre-roll ads.

Adobe has also looked into authenticated streams and the influence of social media like Facebook on digital video. Head here if you are interested in checking out the full report by Adobe.