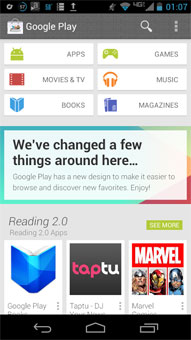 It’s no secret that Google is working on unifying it’s chat and message services in to something called Babel, and the Play Store could really do with a spit and shine, so it’s hardly surprising to see leaks appearing online showing both. Starting with Babel, some users are claiming that a message appears when deleting certain messages in Gmail. The message says:

“All conversations have been moved to the Trash. Because one of more are part of a Babel chat, these messages are still available in other Babel chat applications.”

Not only a pretty solid clue that Babel is on the way, but a nice feature too.

As for the Google Play 4.0 redesign, the above screenshot is said to have been briefly seen on the YouTube page of a Google employee. It has since been deleted but as you can see from the image we have here the new version of Play looks to be bringing better search and app discovery to Android.

And as a bonus leak, the screenshot could also has come from an updated 4G LTE verso of the Nexus 4 as evidenced by the notifications bar.