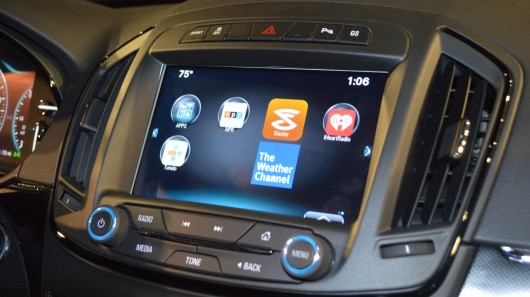 There are apps on just about everything these days. You naturally have apps on your smartphone and tablet, but there are also app stores for things like Smart TVs. And you may have also noticed that the features on in-car entertainment systems are starting to look pretty smart too and that’s why GM is prepared to expand that with an in-car app store.

At CES in January, GM announced that it is releasing an SDK so that developers can create apps specifically for its vehicles. In fact, there is going to be a 4G-supported app store built into that in-dash screen, allowing you to browse and buy apps from right behind the steering wheel. Of course, they don’t recommend you do this while driving, but you know that inevitably some people will try.

The goal isn’t so much to extend existing apps into the cars as much as it is to build apps that are specific for cars. It’s not about having Angry Birds on there. As Phil Abram, GM Chief Infotainment Officer said, “GM may approve applications that stem from vehicle ownership. For example, customers can choose to download applications that assist them in driving more safely or in a more fuel efficient manner, possibly decreasing the costs of vehicle ownership.” Of course, we can expect the usual suite of weather, music, news and navigation apps too.

The built-in 4G also ensures that you can keep downloading and using these apps even when you’re not tethering off your phone or in the presence of a Wi-Fi hotspot. They have a deal with AT&T for this purpose.