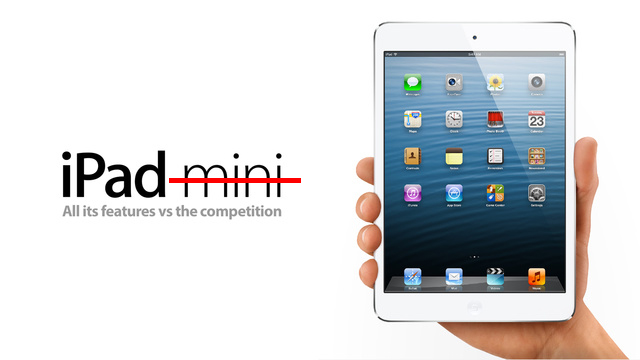 Apple is famous for its products but the Mac maker is equally famous for its trademark issues. You might not have forgotten the company’s secret moves to acquire the iPad trademark and their eventual payment of $60 million. Now they are having trouble with ‘iPad Mini’.

The US Patent and Trademark Office (USPTO) has denied Apple’s application for a trademark on ‘iPad mini’. According to the USPTO, “The term “MINI” in the applied for mark is also descriptive of a feature of applicant’s product. Specifically, the attached evidence shows this wording means “something that is distinctively smaller than other members of its type or class”. It means that even a company as big as Apple can’t patent words.

And it appears like the USPTO is against the name ‘iPad’ as well, since the ‘i’ stands for internet, and therefore also descriptive. They are saying, “When a mark consists of this prefix coupled with a descriptive word or term for Internet-related goods and/or services, then the entire mark may be considered merely descriptive”. But iPad is a registered trademark of Apple in the US.

Now, if Apple plans to get ‘iPad Mini’ they can only do it by proving to the USPTO that the name is descriptive of the entire device and not a smaller iPad. But that might be difficult to do as, according to Apple, the iPad Mini is “Every inch an iPad”, only smaller.