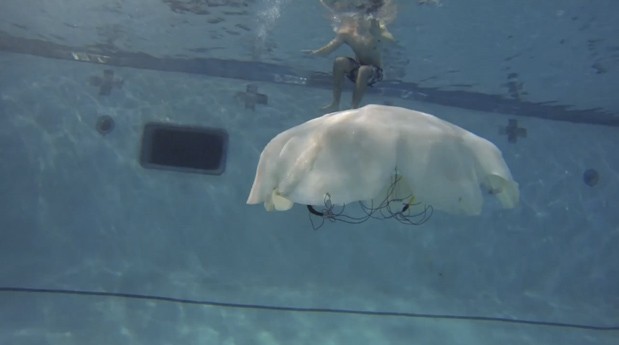 Mankind has always turned to nature for inspiration. Many of the earliest flying machines had flapping wings, for example, because we saw that’s how birds were able to take the air. A group of graduate students at Virginia Tech have taken a similar nature-inspired design for Cyro, an autonomous robot that mirrors the movement of a jellyfish.

This is one of the larger versions that they’ve created to date, measuring 5 feet 7 inches across and weighing 170 pounds. The project was funded by the US Navy, presumably because the military has some interest in using this technology for surveillance or other purposes, but the researchers see how this could be used effectively for ocean monitoring or the cleaning up of oil spills. An earlier version, called RoboJelly, was about the size of a human hand.

The Cyro robot itself has eight mechanical arms extending from its central water-sealed brain and then a silicone skin is laid on top of that. The movement of the Cyro is similar to that of a jellyfish, which is incredibly efficient. They hope that as they improve the design, the Cyro will be able to head out on its own for months at a time. Indeed, the larger the model, the longer the range it could have.

Check out the demo video below, which includes an interview with VT College of Engineering graduate student Alex Villanueva.