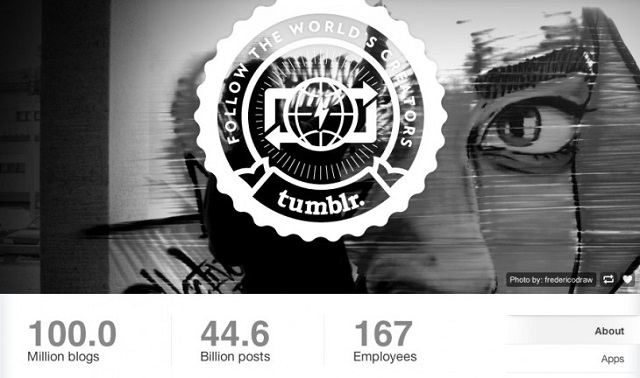 Tumblr has passed a big milestone but it appears like they are not too excited about it as there haven’t been any big celebrations so far. Tumblr is now home to over 100 million user blogs with over 44.6 billion posts. Those are certainly pretty good numbers since the number of blogs and posts have more than doubled in just a year.

In April last year, Tumblr flew past 50 million blogs, a mark which they took five years to reach. From there they have taken just a single year to repeat the feat, and 6 million of those were created this month alone. According to Tumblr’s about page, at the time of writing this there have been 80,231,645 posts to the site just today.

So, although Facebook and Twitter are still going on strong, Tumblr has managed to pull in a really nice audience. But will they be able to turn this growth into real money? These numbers will mean nothing if they can’t find a way to successfully monetize from the impressive growth.

What do you think about Tumblr? Are you one among the 100 million?