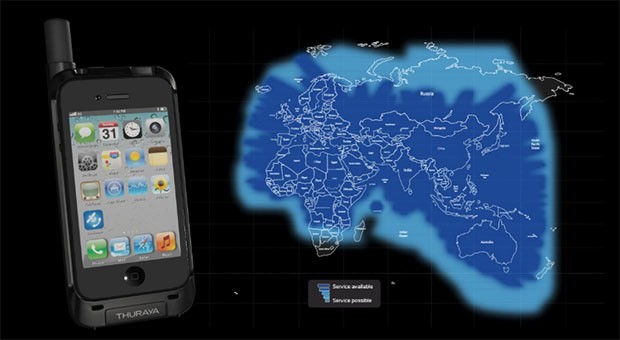 Stuck in the middle of nowhere and need to make a phone call on your iPhone? You are out luck buddy, unless you happen to have the SatSleeve.

The SatSleeve from Thuraya is a special case that turns your iPhone into a satellite phone, freeing it from the limitations of tower coverage. Thuraya says that its satellite service provides coverage for about 2/3 of the planet, which is a lot better than your average cell carrier.

Setup is pretty simple here: you flip a switch on your case to activate satellite mode and phone calls and texts are made and received through Thuraya’s iPhone app. The case even provides its own battery, helping charge and extend your iPhone’s battery life.

As you might expect though, there is no data here. This is strictly for sending SMS and calls. It also isn’t exactly cheap, costing about a buck a minute to use, though in some remote locations it can cost as much as $8.00 a minute, especially if it has to utilize another satellite network to make the call.

Beyond the expensive pricing to make calls, the sleeve itself is also a hefty $500. So why would you ever want one of these? Emergency situations, I suppose. For those who visit remote places, this provides a bit of a back up if the need arises.

Unless you are a billionaire, this probably wouldn’t be a good investment for anything other than emergencies and quick calling in remote places. Imagine the bill if you used this for all your texting and calling needs – I shudder thinking about it.

Anyhow, cool idea, though it is admittedly a niche feature that won’t appeal to everyone. What do you think of the SatSleeve?