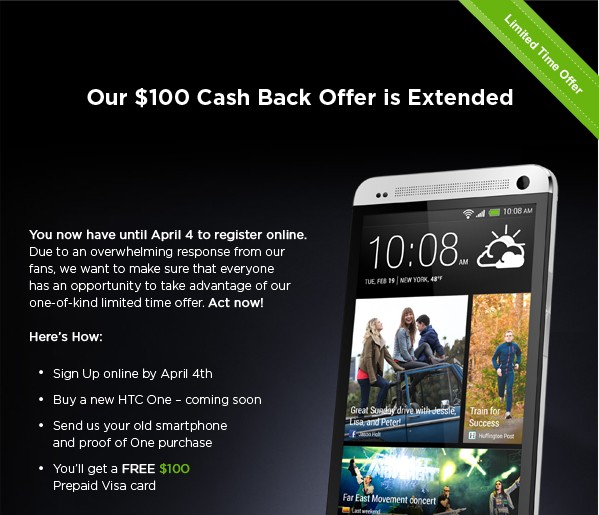 Although the Galaxy S4 is pretty impressive, many including HTC believe that Samsung didn’t deliver this time around. If you are one among them and dreaming about holding an HTC One in the future, you should be happy to hear that HTC’s deal is still available. The HTC One $100 trade-in deal, which began last month, has been extended to the 26th of April.

All you have to do is sign up with HTC here, and then send your old phone and your HTC One proof of purchase to HTC by May 31 and get a $100 Visa gift card (or the value of the device, whichever is greater).

The deal was first extended to April 4th, and now to the above said date. According to HTC, the deal is being extended because of “overwhelming response” from fans, although there is also the possibility of a delay in the phone shipments or the company might also be worried about the arrival of the S4.

But do we really have to care for the reasons? There is a powerful phone available for $100 less, which is indeed a great deal. So, have you already signed up for the device?