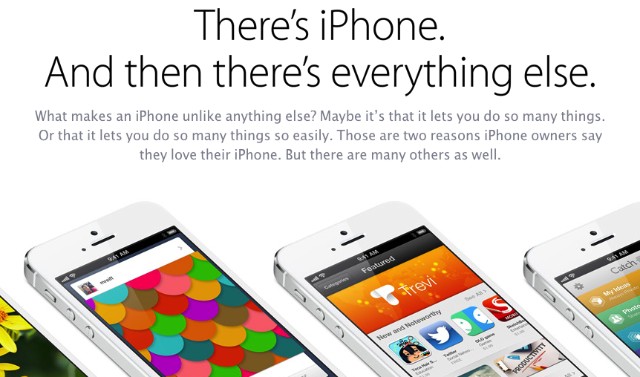 Samsung’s Galaxy S4 is official, it has some pretty awesome specs and it is going to sell like hot cakes. These are the facts, people. Apple doesn’t seem to like this so much though. Samsung has outdone the iPhone once again though, so they have posted up a webpage which details a few reasons why they believe the iPhone 5 is still the best smartphone you can own.

You don’t need to visit the link as I have taken the time to pick out some of the rather lame reasons for and have listed them below:

I can think of a number of phones which offer a fantastic screen, have great battery life, access to thousands of apps and run Android. As for Siri, I never use it on my iPad Mini, and LTE? There are still places around the world that do not even have access to it yet, not to mention that Android devices have been offering LTE as a feature for way longer than Apple.

I have a suggestion for Apple, rather than spending time making lame articles about the iPhone 5, why not make a truly amazing iPhone 6 which will have ex-iPhone users (like me) flocking back to iOS? What do you think of the iPhone 5, how does it compare in your opinion to other phones out there running Android, Windows Phone 8 and Blackberry 10?