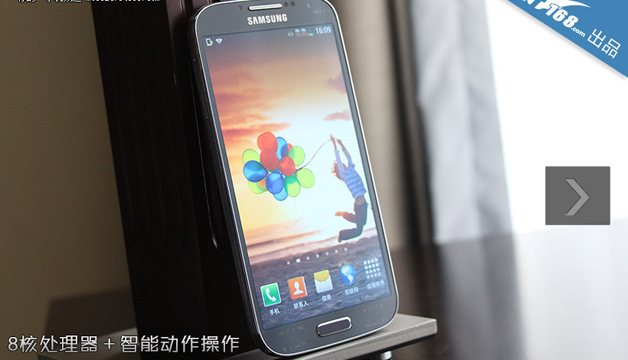 Samsung’s next big thing is here. The Samsung Galaxy S4 is now official, and it certainly looks quite impressive.

The new handset features a 5-inch full HD AMOLED display, a 1.6GHz octo-core Exynos 5 processor 2GB of RAM and a 13MP rear cam. There is also a 2MP front cam, Wi-Fi, LTE, an IR blaster, NFC, microSD, a removable 2600 mAh battery and Andriod 4.2.2 Jelly Bean out of the box – though obviously it still rocking the TouchWiz UI on-top.

If you were hoping that Samsung would finally move away from plastic, no such luck. While the S4 looks quite attractive, it’s plasticky build isn’t too terribly different from the S3 in many ways, though it is thinner at 7.9mm.

Outside of the hardware, Samsung has plenty of software tricks up its sleeves as well such as a new S-Translator, which isn’t that different from Google Translate. There is as an updated camera software present with features like picture-in-picture mode, dual shots and dual recording and more. As expected, there is also eye recognition present in the Galaxy S4. This means that you can scroll through webpages with your eyes, pause video by simply looking away from the screen, and more. There is also hovering abilities with the S4.

Like the HTC One, the IR Blaster means that your phone also doubles as a custom TV remote. Additionally it features built-in pedometer that is paired with the S-Health app that allows for counting of steps, calories and other fitness related information. Taking a page from the Lumia 920’s book, you can even operate the Samsung Galaxy S4 when wearing gloves.

Is there more? Of course there is! The Galaxy S4 also has hands-free access for calls, messages, music, maps and a voice that reads out information to you.

As the story is still developing, we probably missed a few features, but these are some of the biggies. When is the Galaxy S4 coming? The phone is expected to arrive on April 26th in white forst and black mist color configurations. What do you think of the Samsung Galaxy S4, impressed or not?