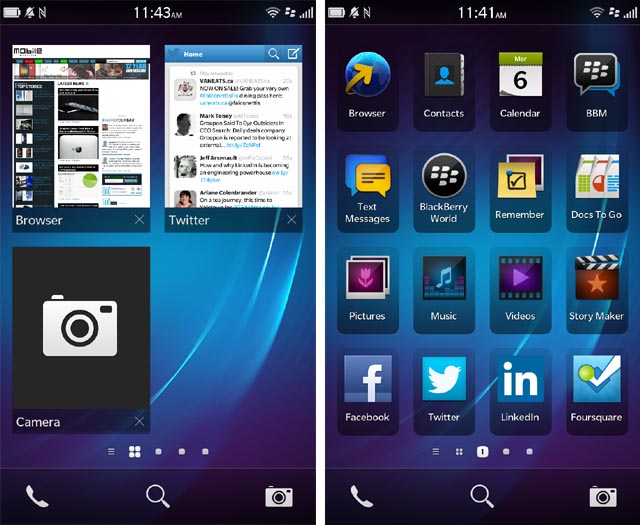 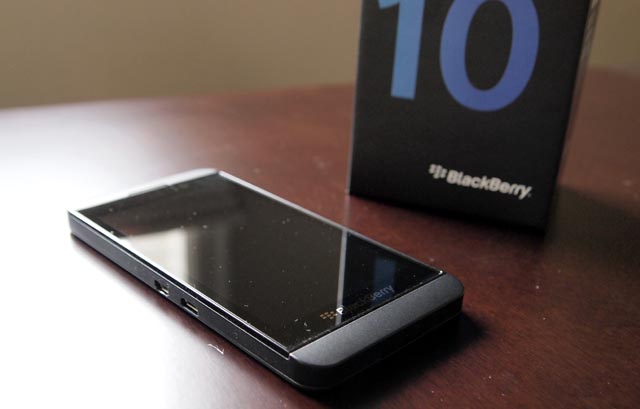 After months of hype, hearsay and hesitation, BlackBerry finally came forward with the official launch of the BlackBerry 10 platform earlier this year. While the QWERTY-packing BlackBerry Q10 won’t be available for a little while yet, the touchscreen-only BlackBerry Z10 is now available through a number of carriers around the world. For the purposes of this review, we got our hands on the Telus version in Canada, but it should be fundamentally the same as the Z10 sold by other wireless providers internationally.

I already posted a BlackBerry Z10 unboxing video a couple of weeks ago, so this is just going to be a quick recap. The BlackBerry Z10 is, of course, powered by the new BlackBerry 10 operating system. It gets a 4.2-inch 335ppi touchscreen, dual core 1.5GHz processor, 2GB of RAM, 16GB storage, 8MP camera, 2MP front camera, and microSD expansion. It also gets both LTE and NFC, as well as Wi-Fi, Bluetooth and GPS. 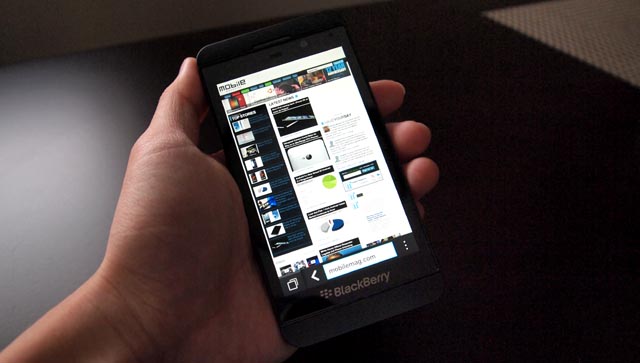 On paper, the BlackBerry Z10 is quite competitive with the iPhone 5 and most higher end Android devices, except that its 4.2-inch screen is noticeably smaller than the much larger Android phones with their 4.7+ inch displays these days. BlackBerry World boasts about 70,000 apps for the Z10, many of which are ported over from their Android counterparts.

The BlackBerry Z10 definitely feels very solid in the hands. I particularly like the rubbery back that provides a great grip. The profile is remarkably thin and I like how the front face is completely lacking in buttons, leaving a much sleeker overall appearance. 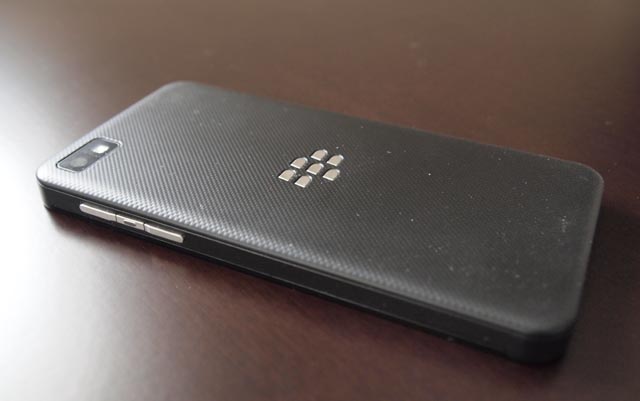 As I have grown accustomed to Android displays of 4.7-inches or bigger, getting back to the 4.2-inch display felt comparatively small. The overall form factor, in this way, is closer to the iPhone 5. The difference is that the word “BlackBerry” on the bottom is not a home button; it really doesn’t serve any real purpose.

People who are coming from legacy BlackBerry products may face some confusion with BlackBerry 10. There is no BlackBerry button, for example, nor is there is a hardware back button. Just about everything is done via gestures and many of these originate from off the screen, not unlike webOS. You get back to the home screen, for instance, by swiping up from off the bottom of the display (where the BlackBerry name is). You swipe in from the right side to access functions and swipe in from the top for certain contextual settings.

The UI isn’t terrible, but there is a bit of a learning curve. One thing that BlackBerry 10 is still lacking, though, are home screen widgets. You only get a page where it displays your last eight apps in a widgetized kind of form, but you can’t “pin” any of these to stay there forever. You can rearrange the apps in the app drawer, but that’s not really the same thing.

And speaking of apps, there just aren’t enough at the moment. The pre-installed YouTube “app” is simply a browser shortcut, for example. The native Twitter app, while functional, isn’t nearly robust enough for power users. It doesn’t support lists and your DMs are bundled together with your mentions in a single column. That’s not good enough. The hope is that third-party developers will continue to adopt this platform and, in time, the app selection will improve. 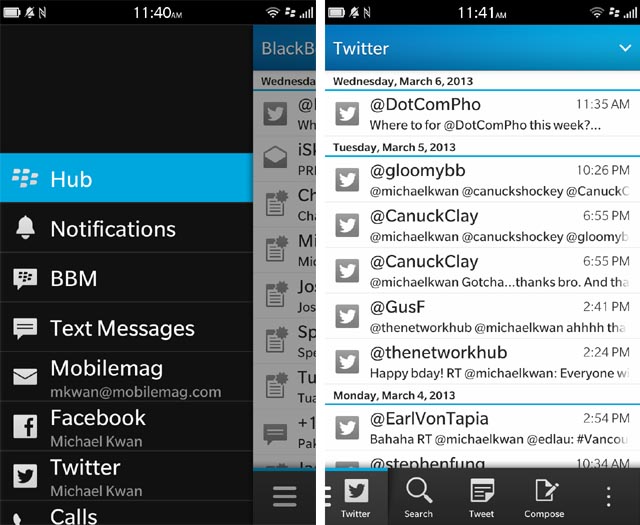 Your real home is the BlackBerry Hub, which can be accessed by swiping up from the bottom and then toward the right. Alternatively, it is effectively the leftmost home screen. Here, all of your notifications are amalgamated into a single interface, including texts, emails, Facebook updates, Twitter, Foursquare and so on. There are several “tricks” and UI quirks here that you can use, but I feel there is still a lot that can be improved.

For instance, when you are within one of the notifications, there is no option to easily move to the next one. Instead, you have to hit back to get back to the list of notifications and then choose the next notification. It should be simpler and faster than that.

The 8MP camera on the BlackBerry Z10 is decent, but it won’t win any awards either. It seems to have a habit of overexposing, leaving some washed out elements, but this really depends on your lighting conditions. Here is a macro-esque shot that I took indoors under soft incandescent lighting. 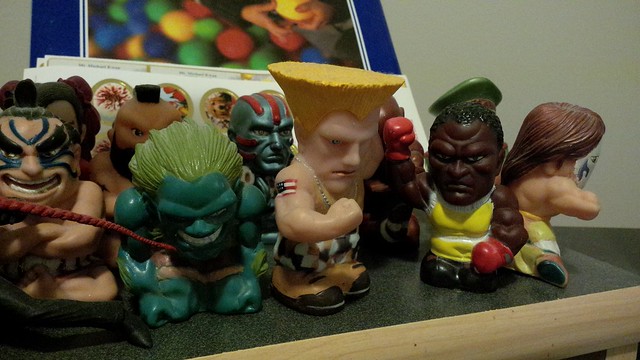 Clarity and detail are good enough to get the job done most of the time. Much like the rest of BB10, the camera app has a bit of a learning curve. For instance, it’s not tap-to-focus, as it is continually hunting for autofocus. It’s tap for shutter, so you have to make sure the square is green before tapping the display. I uploaded a full 1080p HD video to YouTube, as well as more photo samples to Flickr if you want to see some more. They’re all untouched and unedited, taken straight out of the phone. 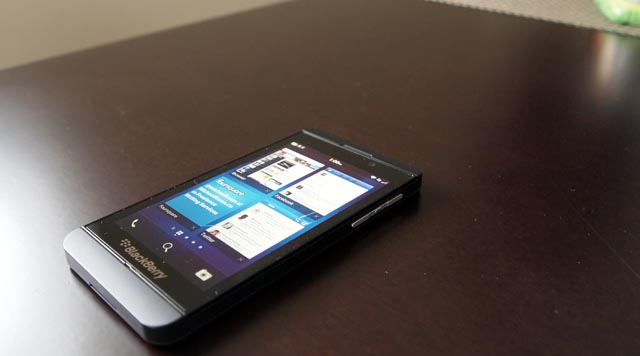 I tried to be optimistic about the BlackBerry Z10. This was supposed to represent the rebirth of the company and a real push to, at the very least, be seen as a legitimate number three in the world of smartphones behind Android and iOS. The device has been able to attract some new users, to be sure, but we can already see that they’re starting to run low on momentum.

BlackBerry 10, as a platform, is an overall improvement over previous versions and it’s good to see that BlackBerry is prioritizing the development of third party apps. The phone itself is solid and it performs well, but it still feels incomplete compared to the more mature Android and iPhone offerings already on the market. It lacks a unique selling proposition that would make me want this instead of what Google, Samsung, HTC, Apple and others are giving us.

If BlackBerry manages to survive and if the Q10 gives them a little boost later this year, then I’m hoping that the BlackBerry Z11 and Q11 will be the real stars that the Z10 and Q10 should have been.