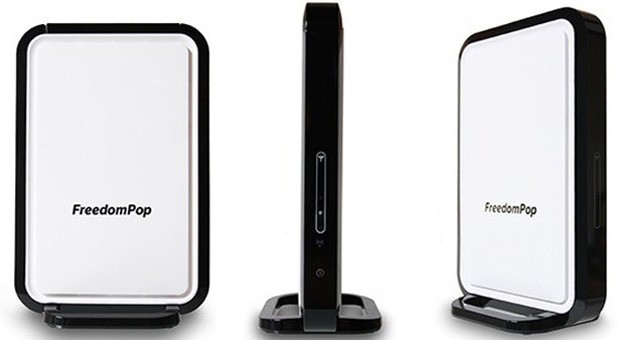 I’ve had my FreedomPop Photon 4G mobile hotspot for a number of months now and while coverage could be better, you can’t complain all that much when the service is completely free. The mobile hotspot is good for the road, but what about when you’re at home? FreedomPop announced a home service late last month and now they’re ready to follow through with that, offering the same kind of free Internet access as the mobile version.

There are a couple of pretty huge differences, though. First, instead of the tiny Photon 4G, you’ll need to invest in the $89 Hub Burst, a unit that combines a router and modem in one. It plugs into the wall like how most routers would, but you don’t need to run a cable into it. Instead, the Hub Burst connects to the same WiMAX network as its mobile counterpart. In this way, you are best advised to put the Hub Burst as close to a window as possible.

Second, while the mobile plans provide you with 500MB of free data each month, the home plan will give you 1GB of free data for free. That’s a nice little top-up, but realize that 1GB won’t go that far with your regular home web traffic unless you’re really light with your usage. Thankfully, they offer pretty great upgrade plans too, starting at $10 a month for a 10GB cap. You can also pay for faster speeds, bumping up from the complimentary 1.5Mbps to get a much better 8Mbps at $19 a month.

Check the FreedomPop home Internet page to see if you have service in your area. They’re not going to have LTE up and running until at least Q3, so it’s still worthwhile to consider this unit in the meantime. You can always upgrade, after all.