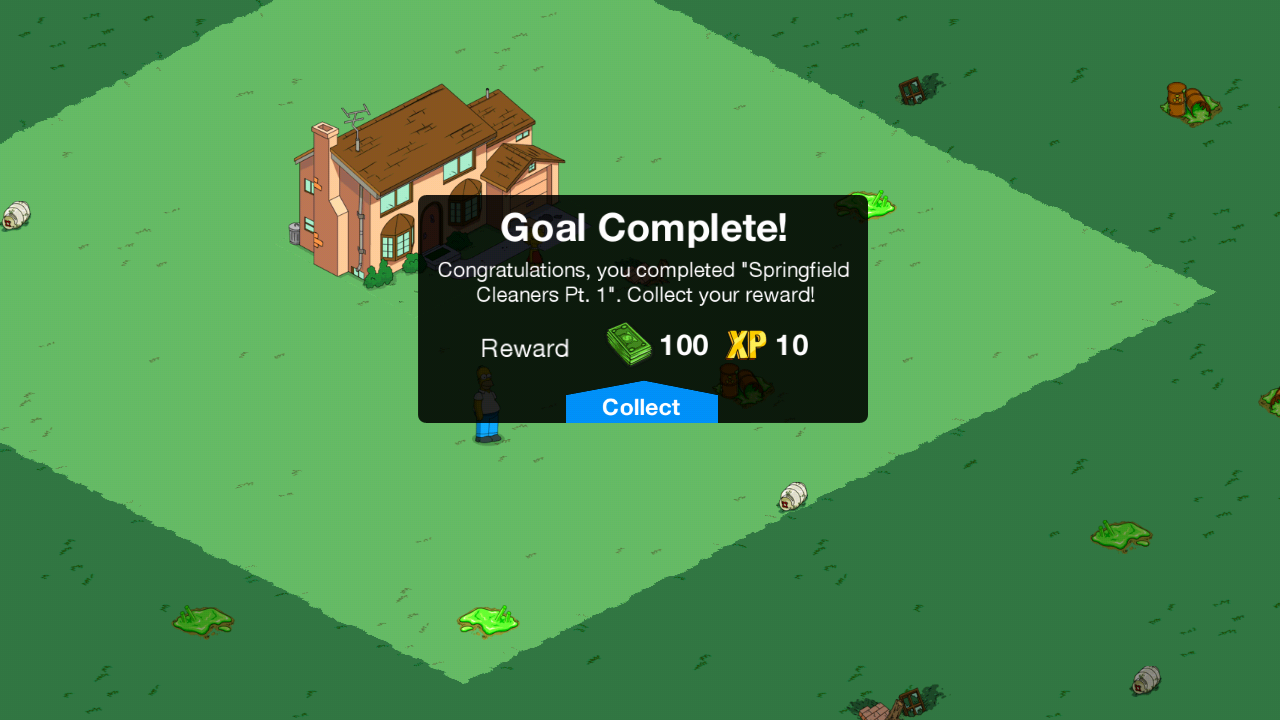 After doing the hokey pokey with the app store whilst EA attempted to improve their painfully renowned dodgy servers, I couldn’t help but be curious about Simpsons Tapped Out and what the game may entail.

Of course, from first look it’s easy to see that the game is just another rehash of the already widely available social/casual/sim games on the market that offer a fragmented experience to rope players into paying for more play-time, but from an outside perspective, the cheerful yellow characters and colorful well-known Springfield environments gave me enough reason to try getting into the game, despite my usual avoidance of this genre.

How Simpsons: Tapped Out Stands out From the Crowd

After first downloading the Simpsons: Tapped Out I was delighted to find myself watching an animated short showing Homer and his classic idiocy in full action. Whilst Homer plays a game similar to the one I’m reviewing right now on his iPad, his job is left neglected, creating a disaster that wipes out all of Springfield. This animation defines the prologue of the game, explaining the reason behind why you’re doing what you’re doing within the game. 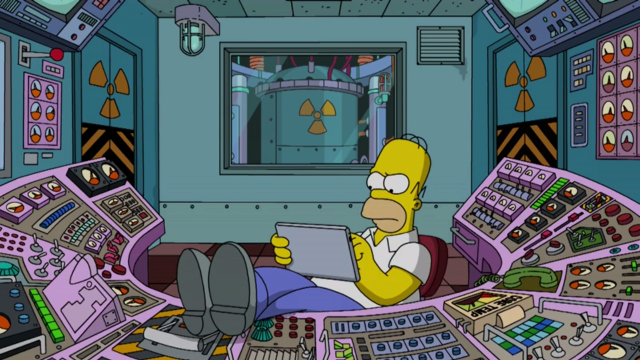 After this point the gameplay is filled with small remarks that you’d expect to hear from each of the Simpsons characters as you meet them in-game. Objectives also reflect upon each one of the character’s personalities, and the game seems to have a strong relation with the characters, instead of other functions like crops or animals.

As you progress through the game, you’ll also unlock more and more characters to fill up your town with, and it gives the game a sense of direction which most games in this genre seem to lack after the first three to five levels of gameplay.

Just like any casual-social mobile game, the gameplay of Simpsons Tapped Out is heavily situated around time-based activities which usually grant you currency and EXP for completing. In Simpsons Tapped Out you can give each of the characters you have in your town tasks to complete giving the Simpsons characters attributes usually found in a mobile Sims game. 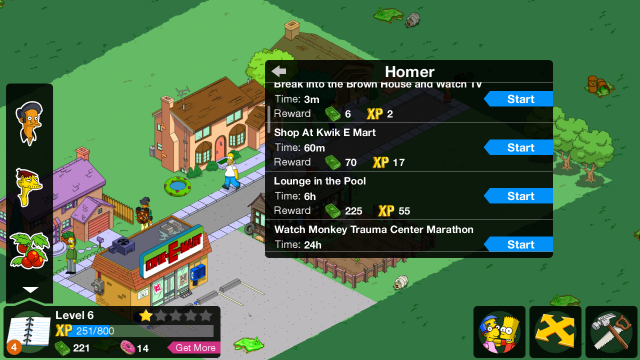 You’ll also have a few quests to complete on the side of the screen that often offer more rewarding benefits than those of the repeatable character actions.

At the start of the game, quests are used to help a player get used to the game concept, but as you progress, quests are also a requirement to purchase certain buildings or unlock some characters, once again giving the game a little more meaning than what I’ve found in previously played games of this genre. 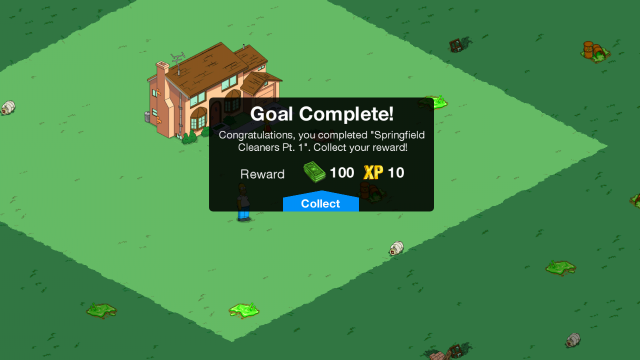 I found myself happily attached to the town I was building, partly because like other games, it became progressively more time consuming to place down parts and building pieces, and of course this is a strategy used to make players feel more inclined to spend big on the in-app purchases, but also because the Simpsons characters I knew so well from the TV series retained their personalities in-game. The same voices we’ve heard from TV also made it to Simpsons Tapped Out, and it really gives the game a strong feeling of authenticity.

If you’ve played any games like the Simpsons Tapped Out before and have enjoyed it then it’s definitely worth giving this one a try as well. Unlike some games there isn’t an energy system, meaning you can keep yourself busy without running down your in-game energy levels. The game still is quite slow paced, and there isn’t really that much action to it. 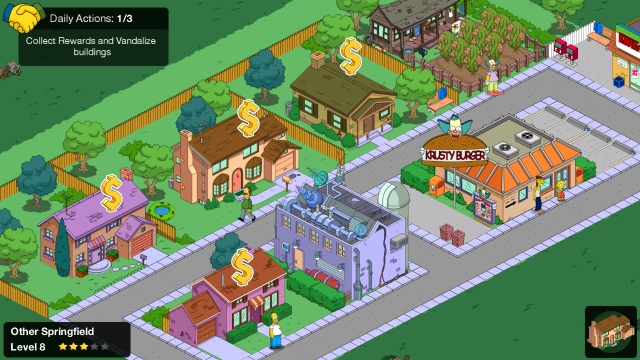 This can be a good thing though, especially if you’re more into games that you can play in between doing other tasks. The Simpsons Tapped Out falls into a category I tend to call ‘Lazy Day’ games. They perfectly accompany a relaxing day at home whilst you slowly tend to tasks that may need to be done round the house. It’s certainly not a game you can play for hours on end though, unless you’re willing to spend real cash to speed up timed events every few minutes.

With Fast paced action games sitting alongside the Simpsons Tapped Out in the app stores, it’s completely understandable why you may not like this game. The gameplay in this game, just like many others of its type is very slow paced, and because of this, it may become quickly boring for you if you prefer quick paced gameplay.

There are a few aspects of the game that give it direction, but it still lacks that major underlying goal that most other game genres capture so this could be another reason that may give this game a zero on your radar. 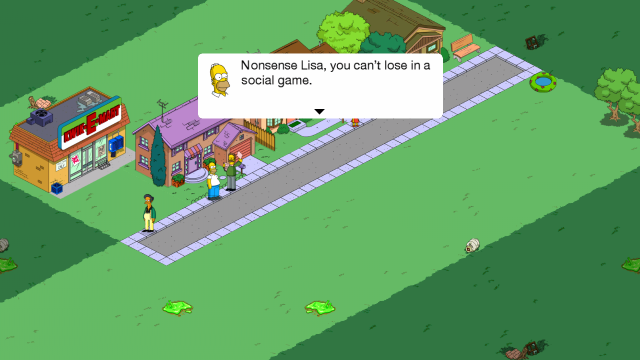 If you’re not too into the Simpsons then there really isn’t much that sets this game apart from others either. If you do like casual games it’s worth a try though.

You can download The Simpsons: Tapped Out below:
Android
iOS