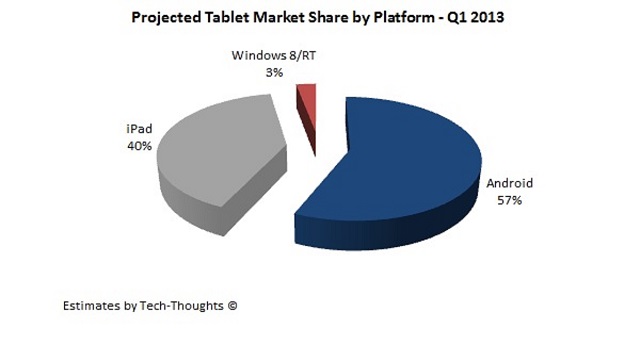 At present, there are many 7 inch Androids tablets out there for customers to choose from such as the Nexus 7, the HP Slate 7, or devices from Acer, Asus, Lenovo and countless others. Being highly portable and offering lower price tags, smaller Android tablets are becoming quite popular. And now, it appears like these new tablets will be overtaking the iPad in quarterly market share, according to estimates by Sameer Singh at Tech Thoughts.

Data suggests that 57% of the market will be taken by Android tablets while iPad will take 40% by the end of Q1. These predictions are mostly based on tablet display shipments. Of course we can’t say that these figures will be completely accurate, but analysis of the supply chain sometimes does tell us what is coming especially in the near future.

According to available data, compared to the shipments of the iPad Mini and the full-sized iPad, the shipments of 7-inch Android tablets are on the rise which might be suggesting an increasing demand for cheaper 7 inchers. Although 10-inch tablets are still popular, they don’t seem to be growing at the same rate as 7-inchers, both running Android or even Apple’s own iPad Mini. In fact the iPad Mini is also affecting the sales of the 9.7-inch iPad.

Will 7-inch Android tablets overcome Apple’s iPad in the tablet market soon, or will these predictions prove wrong? We will have to wait and see. In the meantime, you can share your thoughts on the matter.

Do you prefer iOS, Android, or maybe even Windows on a tablet? What size of display, 7 to 8 inches or 9 inches plus?