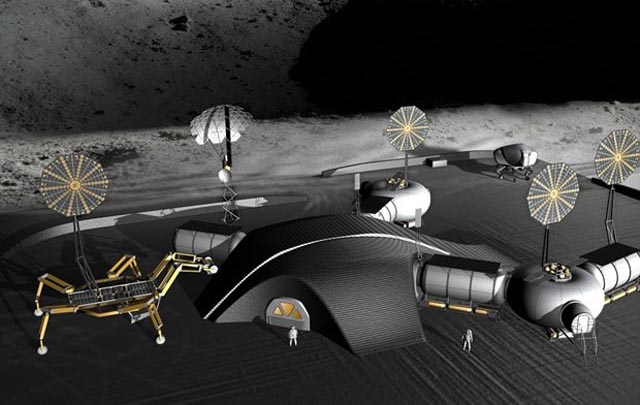 Last month, we read about how the European Space Agency was teaming up with architectural firm Foster and Partners. The idea is that they would use 3D printing technology to build a lunar base. This makes a lot of sense, since it utilizes existing resources on the moon to build those structures, rather than shuttling all those materials from Earth. It seems that NASA is working on a similar idea.

NASA is also considering the implementation of 3D printing tech for a lunar base near the moon’s south pole (where sunlight is nearly constant; good for solar energy), but they’re going about it in a slightly different way. The tech is called SinterHab and the spider robot would “sinter” the lunar dust. This means that it will heat it up to just below its melting point, allowing the super fine nanoparticles to fuse together into a solid block of ceramic-like material. The particles would reach temperatures of up to 1500 degrees Celsius during this process.

The main advantage that SinterHab has over the ESA proposition is that this doesn’t require the shuttling of binding agents from Earth. The resulting blocks of material could then be assembled into habitats and other structures that the astronauts could then use as a base.

Embedded above is a video of the Athlete rover, which is a half-scale model of what they would want to bring to the moon for this project. There are 48 3D cameras on board. All they’d have to do is attach the microwave 3D printer to one of its six legs and we’d have ourselves a lunar construction vehicle. Interestingly, Athlete can also split in half into two three-legged rovers for increased versatility.

More work is needed, to be sure, but projects like this clearly demonstrate that there’s more to 3D printers than just making awful-sounding records and 3D busts of Yoda.