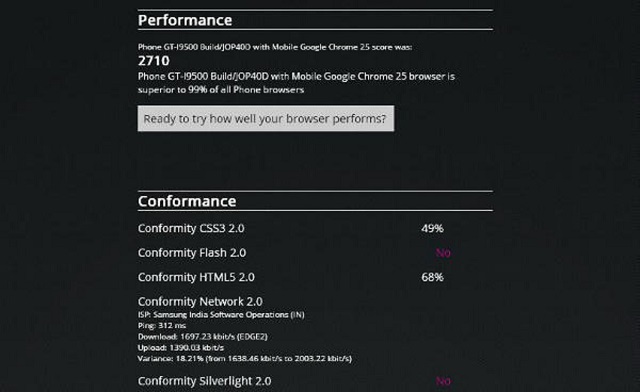 Tech lovers around the world are waiting for March 14 to take a peek at the hotly anticipated Samsung Galaxy S4, and now it seems that the device is going to be very, very fast. At least if you believe the new benchmark results from Browsermark 2.0 browser benchmark for the Samsung Galaxy S4.

The tests were done on a GT-I9500 device, which is most probably the Samsung Galaxy S4, which runs Build JOP40D (Android 4.2.1) and Mobile Google Chrome 25. The device has managed an impressive score of 2710, which puts it ahead of all other smartphones around, including the iPhone 5 and different versions of the S3 and Note 2.

Keep in mind, there’s no way to be absolutely certain that the device they used for the tests is the S4 and even if it is we can’t say it’s completely accurate. The real world performance of the handset could be different. Of course, Samsung certainly won’t come out with a device that’s not enough to create trouble for rivals.

As for the specs of the device? Rumors suggest a 5-inch 440ppi 1920×1080 display, a 13 megapixel cam, and Samsung’s Exynos 5 Octa eight-core chip. There are also reports suggesting the Qualcomm Snapdragon 600 quad-core processor will be used instead of Samsung’s own processor due heat issues with putting the Exynos 5 Octa into a smartphone. Earlier, the Galaxy S3 shipped in the US with a Qualcomm chip, but that was because of the lack of Samsung’s own LTE solutions. At the moment it is really hard to say what the ‘actual’ specs will be, but regardless we can expect a powerhouse.

Are you excited for the Samsung Galaxy S4?