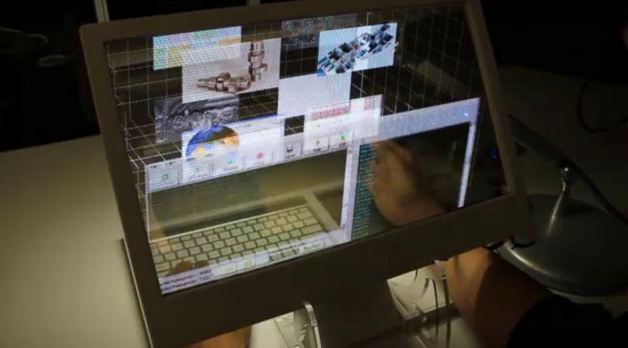 We’ve seen 3D televisions and 3D monitors, but the way that we interact with them is still on a two-dimensional basis. That could be changing with SpaceTop 3D, a three-dimensional computer interface developed by MIT graduate student Jinha Lee.

As you’ll see in the demo video below, you effectively reach “into” your computer monitor to manipulate the different windows, documents and other elements in a virtual 3D space. There are two cameras that make this possible. First, there is a camera there to track your hand gestures, allowing you to literally “grab” a window and move it around. Second, there is a camera to try your eye movements so that the UI can adjust accordingly.

The display itself is powered by a transparent LED so that you are able to see “into” the flat panel into the 3D space behind it. This could completely change the way that we use our computers in the future, assuming that the big computer companies get on board and work to refine this kind of system. You can see how a 3D space like this would be great for product designers and architects, as well as the possibilities for augmented reality. If you thought the Nintendo 3DS was neat, you ain’t seen nothing yet.

Of course, the SpaceTop is still very much in early development, but even in these early stages, it demonstrates a lot of promise. Would you want a computer UI like this? Is this, perhaps along with Google Glass, the precursor to real Minority Report style interfaces?