The HTC One has made a huge splash so far, but you have to wonder, will the HTC One begin the path to recovery and the start of a new era of popularity for HTC, or is the praise heading the phone’s way going to be short-lived? This is a good question.

There are quite a few other higher-end smartphones arriving in the not-too-distant future, many of which will run on the same Snapdragon 600 processor and feature better or the same specs all around. That means that HTC needs to win over consumers based on the marketing and hype they’ve generated so far.

All eyes are on Samsung right now, with the Samsung Galaxy S4 scheduled to make its first appearance in March. While the HTC One might stand out against the existing S3, the Galaxy S4 is going to be tough to beat.

We don’t know the exact specs of the Samsung Galaxy S4 (for obvious reasons), the chart directly below this sentence shows several of the specs are they are currently rumored for the device and compares them to the S3 (US version) and the HTC One. 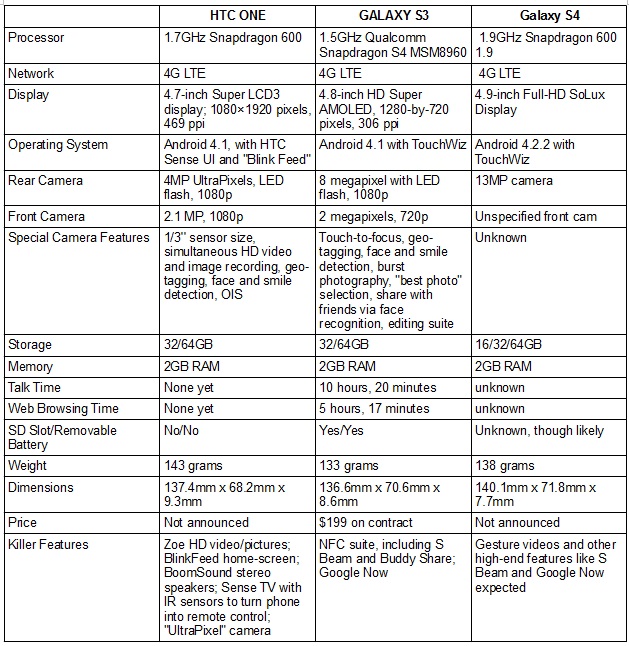 The HTC One – Can it Compete?

When it comes to core features, you can see from the chart that the HTC One is clearly a step above what the Samsung Galaxy S3 brings to the table. That said, not everyone is going to love the unibody design that makes the HTC One’s battery non-removable and creates a phone without support for microSD. There are also some users that feel the HTC One looks to much like the Blackberry Z10. Though, that’s not necessarily a bad thing.

The question is whether the HTC One has brought its ‘A game’ and can finally give Samsung a challenge. Based on rumors that HTC is buckling down and relying on the HTC One as their sole flagship for 2013, they certainly seem to have confidence in their new flagship.

The Galaxy S4 Could Put Them Back in the Same Rut

If the latest rumors are to be believed, Samsung will not be going the Exynos-route, instead relying on a Qualcomm Snapdragon 600. As the chart shows, the Galaxy S4 is rated as faster than the One, though the rest of the features match pretty closely.

Where the HTC One could run into problems is that it doesn’t have universal carrier support in the US (no Verizon, at least for now), while the Galaxy S4 likely will. Also the S4 will probably stick with their tradition of non-removable batteries and microSD, something HTC is missing.

HTC often releases a promising looking handset ahead of the competition, only to be overshadowed later on by brands like Samsung. Still, there is a lot more promise for HTC’s current path with the HTC One than we’ve seen in the last few years.

The Motorola X Phone also needs to be considered here. For those that don’t know, Google looks to be aiming at a high-end X Phone for later this year, which will run on Android 5.0 and will essentially be a Nexus, though it sounds like it won’t actually use the branding.

Part of the reason for this is that rumors indicate Google is concerned that Samsung has become too big of a giant in the Android world and too much means it is easier to demand more from Google. The solution could be to bring out their own big guns with the X Phone — but this could also be really bad timing for the HTC One and could further overshadow the phone.

The HTC One is a solid phone for existing HTC fans and those that don’t want to wait around for other major flagships to start showing up, since HTC One is getting ahead of the game with the release of their flagship.

Long-term though? That’s much harder to answer. I like HTC and I wish them the best, but the battle certainly looks uphill for HTC throughout 2013. Does that mean they can’t pull off a turn-around with the HTC One and work their way back to the top? Anything can happen if you can get execution (marketing and hype, a good release frame, etc) right.

What do you think, does the HTC One feature good enough specs and design to set it apart from devices like the Motorola X Phone and Samsung Galaxy S4? Do you agree that the HTC One will have a hard battle ahead or do you think that it will blow away the competition and drive HTC back up towards the top? Let us know what you think in the comment section below.