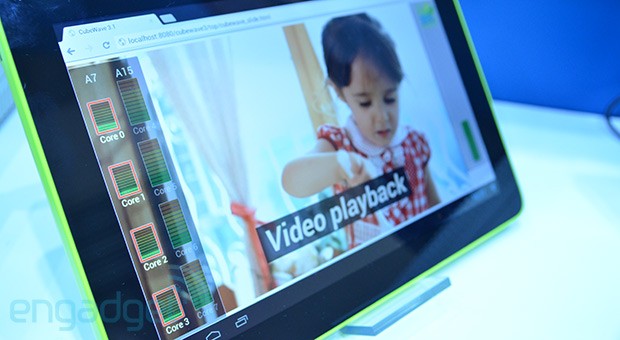 Back at CES, Samsung announced an all new version of the Exynos processor called the Exynos 5 Octa. Simply put, the 5 Octa is a 8-core CPU which will be used in mobile devices from phones and tablets to possibly even Chromebooks, but it’s not all as open shut as that.

The Exynos 5 Octa is actually made up of 4 Cortex-A15 cores and 4 Cortex-A7 cores, with the cores switching on an off as and when they are needed. For example opening a web-page requires more grunt so the A15’s will kick in, but once the page has loaded the A7’s will take over. Playing graphically intensive games will make use of the A15 side of the Exynos 5 Octa, while video will only need the power of the A7 side.

This LITTLE.big core switching means the processor can run more efficiently and can possibly reduce power drain by as much as 50%.

Samsung has put together a prototype tablet running the Exynos 5 Octa for ARM at MWC, where Engadget have been able to take some video of it in action, as seen below:

What do you think, impressed by the prototype unit or not?