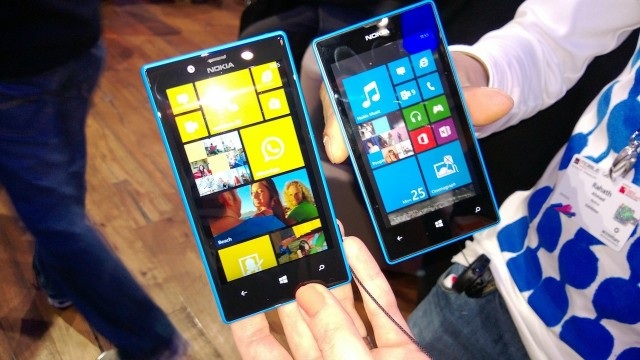 As expected, Nokia has announced budget Windows Phone 8 smartphones which are aimed at broadening the reach of WP8 at the MWC. But although the Lumia 720 (left in the image) and the 520 are budget handsets, the specs are pretty reasonable for their prices.

The Lumia 520 is the low end model and is similar in design to the Lumia 920 and 820 series. It has the curved back, pillowed glass over the screen, and a super sensitive touchscreen. The specs list includes a 1GHz dual core processor, 4-inch 800 x 480 IPS display, 512MB of RAM, 8GB of storage with a microSD slot (supports 64GB), and a 5MP camera. You will also get to play with interchangeable backplates (yellow, red, cyan, white, and black) that feature wireless charging.

But no NFC, no flash for the cam, no front cam, and no LTE which is no surprise since it is mainly targeted at the markets in Asia, Europe, and South America. But surprisingly T-Mobile in the US will add it to its network sometime in the coming months for an unknown price, although we do know that it will cost €139 when it arrives in Europe.

The 520, although not coming with heavy specs, should give you a feeling of a high end handset. But you will get more with the 4.3″ Lumia 720, especially with the handset’s 6.7MP cam (flash included) with a Carl Zeiss f1.9 (large aperture) lens for good performance in low light conditions. It also has a front cam and you get wireless charging via a replacement shell. Reportedly, it’s light and comfortable in the hands. And it has a 2000mAh battery, pretty good for a mid-range handset.

The 720 will cost €249 and will be launched in Hong Kong, Singapore, and Vietnam this quarter, and in Asia, Europe, and South America in Q2.