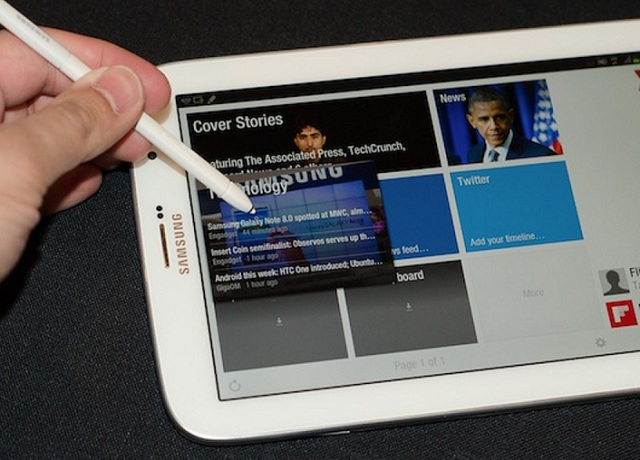 There was a size gap between the Galaxy Note 2 and the Note 10.1, but not anymore. Samsung has officially unveiled their Galaxy Note 8.0, which was expected as the company certainly can’t stay ahead without reacting to the success of the Nexus 7 and iPad Mini.

Similar to the other Galaxy Notes, this one also features the S Pen functionality, but one of the key features is that the device will allow you to make and take phone calls on the HSPA+ enabled version of the device. This is a pretty big distinction as it basically turns your tablet into a phone of sorts, though most people using it this way will likely opt for a bluetooth headset as opposed to holding this monster up to their ears.

The device is coming with a 1,280 x 800 screen, which is certainly not something that will help in the sales especially with all the rumors about the Nexus 7 successor with a full HD screen.

As for the other features, it has the 1.6 GHz Exynos 4 quad, 2 GB of RAM, HSPA+ 21 Mbps, a 4,600 mAh battery, Android 4.1.2, and it resembles the company’s Galaxy S III design wise. The device will be available sometime in the second quarter but no hints regarding the price tag. If the company is thinking about competing against the Nexus 7 and iPad mini, the price should be around $300 and $500.

So are you interested in the new tablet? Do you like the idea that it can also be used for phone calls?