Tegra 4 — Nvidia’s “secret ingredient” for future smartphones — is now the world’s fastest mobile processor, if we are to believe the benchmarks that are coming in. The Tegra 4 appears to be capable of demolishing every other mobile processor out there.

The new chip’s power was showed off on a few prototype devices at the Mobile World Congress and it appears to be far better than the Tegra 3 and Qualcomm S4 processors currently out there. But how about Apple’s A6 processor, you ask? The Tegra 4 Skadooshed it. 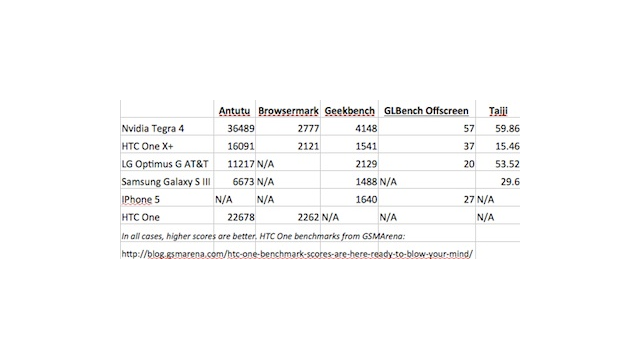 But just as Nvidia claimed about its new chipset, Qualcomm also boasts about its Snapdragon 800 that it is faster than Tegra 4. We will have to wait until 800’s benchmarks are here to know for sure, and also there is Samsung’s Exynos 5 Octa to consider. The 1.7-GHz Snapdragon 600 chipset, 800’s little brother, on the HTC One was tested and we can see that the Tegra 4 is a clear winner.

For now, it’s safe to believe that the Tegra 4 is ahead in the race and we can wait for its arrival in Nvidia’s Project Shield, and don’t forget about the Tegra 4i powered Phoenix about which we reported earlier.

What do you prefer, Qualcomm or Nvidia processors?