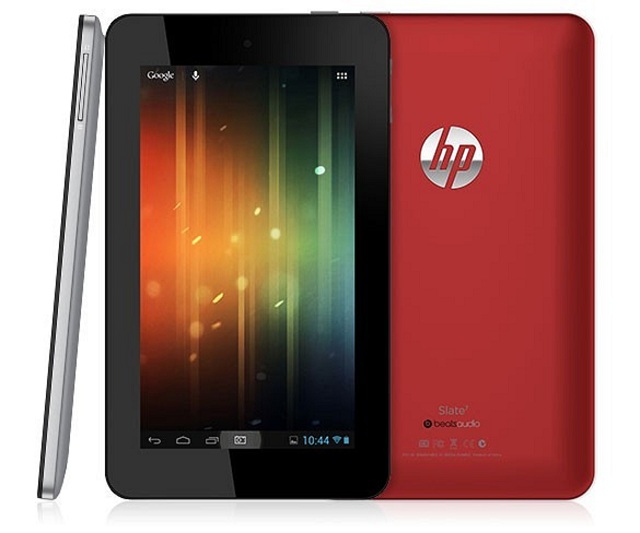 HP surely learned a lot of lessons when they tried to take on the iPad with their webOS-based Touchpad, the sales of which were stopped after just seven weeks. Now it appears they have targeted the Google Nexus 7 with their first ever Android tablet, the HP Slate 7. The new tablet is intended for the budget segment, but the question is whether it will succeed against its top rivals.

Running the Android 4.1 Jelly Bean OS, the HP Slate 7 costs just $169, cheaper than the $199 Google Nexus 7. But the Slate 7 is slightly more expensive than budget 7-inchers from Acer (Iconia B1) and the Asus (Memo Pad).

Specs wise the device is not that impressive, but it seems to be just about right for the low price. The device sports a 7-inch HFFS display with a resolution of 1024×600, lower than the Nexus 7.

It also features a 1.6 GHz dual-core A9 processor, 1GB of RAM, 3MP rear camera and a VGA front facing cam. In comparison, the Iconia B1 has no rear cam and boasts just 512MB of RAM, and no rear camera and only a single core processor on the Memo Pad. The Slate 7 is coming with 8GB on-board storage, but you can extend it with the microSD card slot. The device also features Beats Audio and the HP ePrint application, which will allow you to print directly over Wi-Fi.

So the specs are not that bad for that price range, but still HP is a bit late to enter this segment and an April launch means that other rivals may also arise. While HP hopes to compete thanks to its slightly cheaper pricing than the Nexus 7, that extra $30 for Google’s flagship 7-incher gets you a quad-core Tegra 3 processor,, GPS, NFC, and 16GB of storage.

The HP Slate 7 is an attractive enough tablet, though it doesn’t seem to offer any “WOW” factor either. What do you think of the HP Slate 7, does it bring anything new or worthwhile to set HP apart in the growing budget 7-inch market?