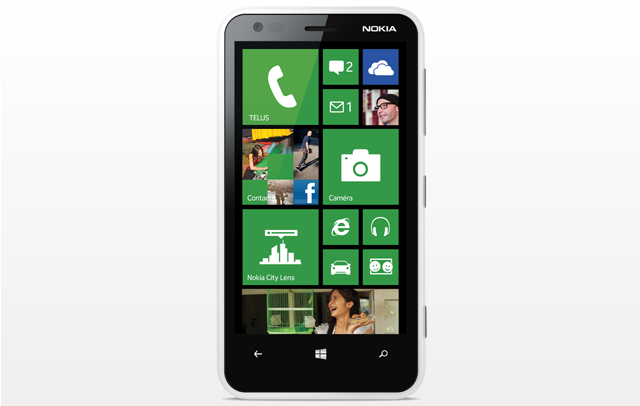 While those in the United States have to go through a retailer like Expansys to get their hands on the Nokia Lumia 620, Telus is now bringing the budget handset to Canada.

The Lumia 620 isn’t a powerhouse by any means, with a 3.8-inch display, 800×400 resolution, 1GHz dual-core Snapdragon S4 Plus, 512MB of RAM, 8GB storage, 5MP cam, WiFi and NFC. What it is though is an attractive and highly affordable handset that runs on Windows Phone 8.

So how much will you have to pay to get your hands on the device through Telus? You have two options. You can pay just $250 outright for the handset, or pay nothing if you sign a 2-year agreement.

The Nokia Lumia 920 will come in black and white versions through Telus, though the shells are interchangeable.

If you like to have the latest and most powerful handset on the market, the Nokia Lumia 620 isn’t for you. If you just want a capable low-end device at an amazing price and wouldn’t mind giving Windows Phone 8 a try, then this could be exactly what you are looking for.

What do you think of the Nokia Lumia 620, interested or not?

The Nokia Lumia 620 brings all the features and qualities found in a premium device at an affordable price. It packs a punch with the 1 GHz dual-core SnapDragon S4 processor, making it possible to multi-task, stream in HD and share content at super-fast speeds. The 3.8-inch ClearBlack display has sunlight readability enhancements so users are able to see what is on the screen no matter how sunny their surroundings.

The smartphone also features an exclusive camera lens that transforms the creative power of the 620’s five-megapixel main camera and VGA front-facing camera. The Cinemagraph lens adds simple animations to still photographs, while Smart Shoot creates a single, perfect shot from multiple images, even removing unwanted objects from the picture. What’s more, the Nokia Lumia 620 uses a new “dual-shot” colour technique to deliver a variety of striking colour and texture effects. Dual-shot adds a second layer of coloured, transparent or translucent polycarbonate on top of a base layer to produce secondary colour blends and depth effects.

“With its innovative design, the latest Windows Phone 8 software and signature experiences from Nokia, like Nokia Maps, the Nokia Lumia 620 is a highly competitive smartphone at this price point,” said Matt Rothschild, head of Retails and Sales Operations, Americas, Nokia.

“The Nokia Lumia 620 marries affordability, function and style in a mobile device, important qualities our customers look for and value in their smartphone,” said Brent Johnston, TELUS vice-president of Mobility Solutions. “We carefully select a versatile line-up of devices that gives our customers choice, such as great starter devices like the Nokia Lumia 620. We also focus on giving them the best possible start with distinctive supporting services and programs like our TELUS Learning Centres, Anytime Upgrades, Device Trade-in and Flex Data Plans that fit within their budget.”

In addition to NFC connectivity, the affordable smartphone also provides access to the world’s best maps and location experience, including Nokia Maps, Nokia Drive and Nokia Transport. It also includes the exclusive Nokia City Lens, which displays information about local surroundings overlaid onto buildings as seen through the camera viewfinder.

The Nokia Lumia 620 is available only at TELUS for $0 on 2-year term on any rate plan or $250 month-to-month. For more information, visit www.telusmobility.com/NokiaLumia620.

Nokia is a global leader in mobile communications whose products have become an integral part of the lives of people around the world. Every day, more than 1.3 billion people use their Nokia to capture and share experiences, access information, find their way or simply to speak to one another. Nokia’s technological and design innovations have made its brand one of the most recognized in the world. For more information, visit http://www.nokia.com/about-nokia.

In support of our philosophy to give where we live, TELUS, our team members and retirees have contributed more than $300 million to charitable and not-for-profit organizations and volunteered 4.8 million hours of service to local communities since 2000. Fourteen TELUS Community Boards lead TELUS’ local philanthropic initiatives. TELUS was honoured to be named the most outstanding philanthropic corporation globally for 2010 by the Association of Fundraising Professionals, becoming the first Canadian company to receive this prestigious international recognition.

To download images of the Nokia Lumia 620, please visit http://press.nokia.com/