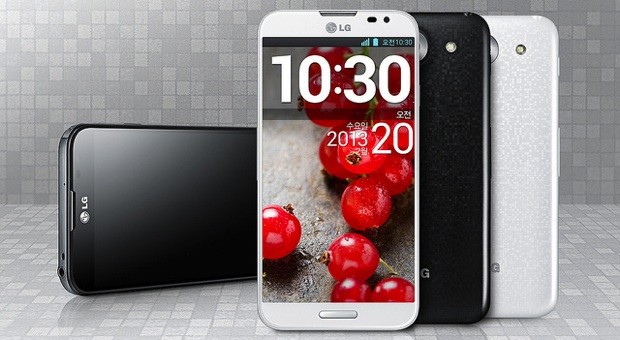 We are starting to learn more and more about the upcoming LG Optimus G Pro 5.5-inch smartphone, including the fact it will be one of the first Snapdragon 600-based devices. We also now know that it is in fact coming to North America.

For those that don’t already know, the Snapdragon 600 one of the latest Qaulcomm processors out there. The 600 isn’t as beefy as the upcoming Snapdragon 800, but the 1.7GHz quad-core chip is certainly a bit ahead of the existing S4 Pro.

Other specs for the Pro include a 3000mAh battery, 2GB of RAM, a 13MP rear cam, microSDXC and LTE. There is also a front cam on the device for video conferencing and recording.

Outside of the improved hardware, we’ve also learned that new software tweaks will arrive with the Optimus G Pro that include the ability to record from both camera at the same time and the use a VR Panorama mode that it supposed to be similar to Google’s Photo Sphere.

So when is the North American launch for the LG Optimus G Pro coming? The phone is expected to arrive in the North American market sometime in Q2, alongside its release in Japan. Final details (including a more exact launch window) will likely be revealed at MWC.