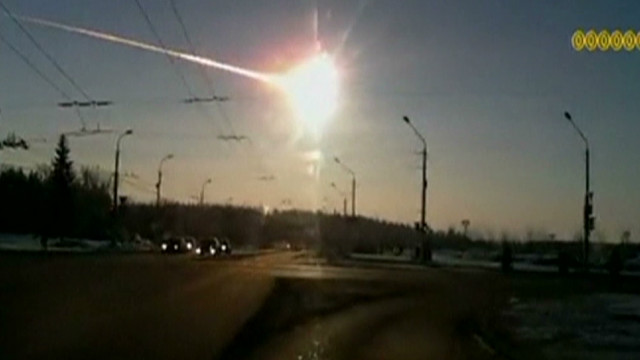 Today a 10 ton meteor exploded over Russia’s Ural Mountains, entering the Earth’s atmosphere at a speed of at least 33,000mph and injuring as many as a thousand people. Thanks to dash cams being very common in Russia, the event was actually quite heavily recorded.

The meteor shattered about 18-32 miles above the ground and then hit down to rush around 9:20 local time, just after sunrise. The meteor smashed down with a shock wave that blew an estimated 1 million square feet of glass, according to city officials in Chelyabinsk.

According to witnesses of the event, the disruption not only smashed windows but even caused cellphone disruption as the meteor exploded in the air. As you can imagine, this caused quite a bit of panic in Russia at the time, and has also lead to speculation that the meteor hit could have something to do with Asteroid 2012DA14, which is making a cosmically close pass by Earth (at 17,150 miles away) sometime later today.

The good news though is that further investigation seems to indicate this is merely a coincidence and has nothing to do with the passing by of the asteroid.

So how many have sought medical care after the shock wave so far? The current count is 985 people, with 44 of them being hospitalized. Not surprisingly, most of the injuries had to do with flying glass. Luckily, there has been no reports of deaths related to the event. There was quite a bit of building destruction outside the injuries, though. Around 3,000 buildings in the Chelyabinsk region have taken damage of some kind.

Reports are coming in that a 20-foot-wide crater was found near the believed main impact area, which could come from space fragments striking the ground. Today’s encounter with a meteor wasn’t nearly the biggest that Russia has seen, though.

Below is a video compilation of just a few of the videos gathered relating to the meteor hitting in Russia:

I can’t imagine how terrifying being right near the impact area would have been. Makes us realize just how little control we have over the cosmos, doesn’t it?