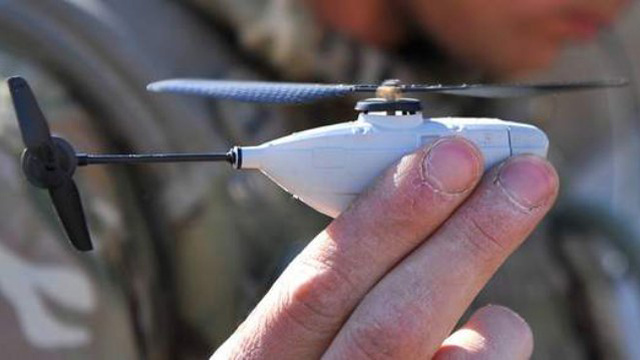 That might look like a cheap toy helicopter that you find in a children’s store, but what you’re looking at is a piece of military technology that costs nearly $200,000 a piece. It’s called the Black Hornet Nano and it is essentially a tiny, tiny drone that can fly into enemy territory and take pictures.

Designed by Prox Dynamics of Norway, the Black Hornet is four inches long, one inch tall, and weighs 16 grams. There’s a tiny camera mounted on board that can send pictures and videos back to a handheld receiver up to a kilometre away, allowing soldiers to gain information about an area without having to directly risk the lives and safety of soldiers that would otherwise be tasked with that mission.

It helps that the Black Hornet is incredibly tiny and flies nearly silently, navigating its way around buildings to see if there is any danger. It can only fly at a maximum of 10 meters per second and the battery pack only lasts about 25 minutes, but that should be enough for some basic recon. It can act as an R/C helicopter or it can act as an autonomous drone based on GPS.

Yes, it’s expensive, but that’s military-spec tech for you. It’s ruggedized to handle the harsh conditions of the battlefield, including extreme heat and wind. The UK Military of Defense has placed an order for 160 units, totalling 20 million GBP. That works out to about $31.3 million or about $195,000 each.