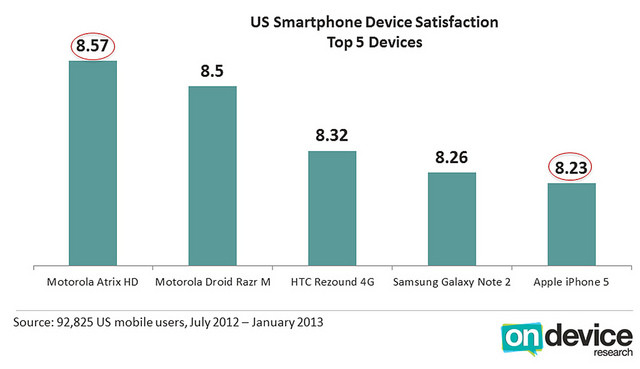 With the sheer number of U.S customers buying iPhone 5’s and Samsung Galaxy S3 phones, you would probably think that they were also the phones which managed to please people the most. But you would be wrong.

According to a recent survey, Apple’s iPhone 5 comes fifth in customer satisfaction ratings, with the Samsung Galaxy Note 2 coming in in 4th place (the S3 isn’t even in the top 5!), while Motorola took 1st and 2nd places.

The phone which managed to please most U.S phone owners is the Motorola Atrix HD, A phone which is currently available on AT&T at just $49. Across the pond in the UK the HTC One reached the top spot with Apple coming in second, and the last 3 places all going to Samsung phone.

Does it surprise you that the iPhone or Samsung phones aren’t at the top of the smartphone sanctification list?