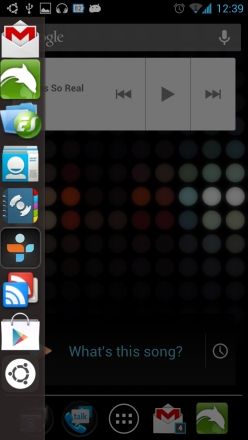 Found yourself highly interested in the Ubuntu Phone OS demonstrated back at CES? For those that liked the look and feel of the upcoming Ubuntu phone OS, you will have to wait until Q4 of this year to get your hands on an actual device. Still, if you simply wouldn’t mind having Ubuntu’s slick dock (side panel), you can grab it right now for your Android device.

“Ubuntu Phone Experience” is a new app available at the XDA-developers forum that brings you the sidebar, and even lets you adjust its opacity and sensitivity. Since it isn’t at the Play Store any longer (likely removed due to Ubuntu name being trademarked), you will have to enable support for apps from unknown sources to get it, though.

For those that don’t like downloading apps from anywhere except the Store, wait patiently. More than likely the name will be changed and it will return to Google Play in good time.

So what’s the downside to adding a dock like this to your Android experience? More than likely it will slow down your device. If you have a higher-end phone these kinds of customization slow-downs aren’t noticeable. If you have an older single-core device though, stock Android is probably the best way to go.

What do you think, interested in the idea of adding an Ubuntu-like dock to your Android device or not?