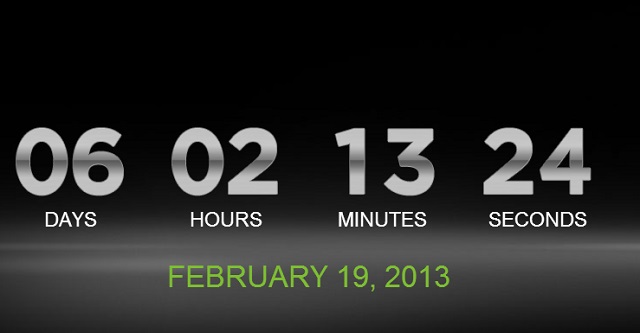 Next week everyone expects the HTC M7 to be officially unveiled, quite possibly under the name “HTC One”. Now HTC has placed a countdown clock on its front page teasing the HTC M7.

The clock is counting down to synchronous events in London and New York, where we hope to see the HTC M7 and perhaps even a few other devices like the rumored HTC M4. There has been quite a few leaks about the HTC M7 before, but hopefully HTC still has a few surprises up its sleeves for the big event. For those that need a refresher, we believe that the HTC M7 will feature a quad-core 1.7GHz Qualcomm Snapdragon S4 Pro processor and 2GB of RAM. Other specs include 32GB storage, a 13MP camera, a 2MP front-cam and a 2,300 mAh battery.

Based on what we believe we know so far, are you excited about the HTC M7?