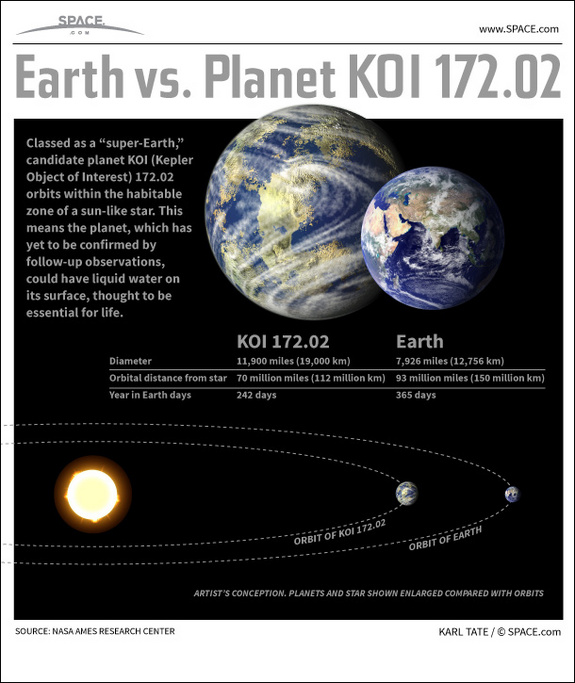 The continued search for habitable planets is on. In the past there has been a lot of attention on the red dwarf star Gliese 581 due to the belief that several of its planets might reside in a potential habitual zone, including the planet Gliese 581g. That’s not the only planet making headlines though, as the planet KOI 170.02 continues to receive plenty of attention as well and has now been detailed in a new infograph.

So what is so special about Planet KOI 170.02? Not only does it orbit within the habitable zone of a sun-like star, it also a “super-Earth” at about 1.5 times the diameter of our planet.

At the moment, KIO 170.02 is yet to be officially confirmed, but the hope is that it could someday prove to contain liquid water on its surface. While it is a much bigger planet, the similarities between the star it orbits and our sun continue to be of interest. Based on what we believe, it should take the exoplanet 242 Earth days to orbit its star.

Planet KIO 170.02 is one of the many planets potentially spotted by the Kepler Space telescope, which launched in 2009 and orbits the sun every 371 days. As Keppler travels, it keeps itself pointed at a single patch of sky, sensors monitor the brightness of 150,000 stars and helps it look for telltale drops in intensity that could indicate orbiting planets.

So even if this planet is truly habitable, does that prove anything or really add anything of value for us? Honestly, no it doesn’t, at least not in the foreseeable future due to the sheer distance between us and KOI 170.02, but it is still interesting nonetheless. What do you think, are there other planets out there just like ours that are simply to far away for us to make contact with? Will we ever reach them?