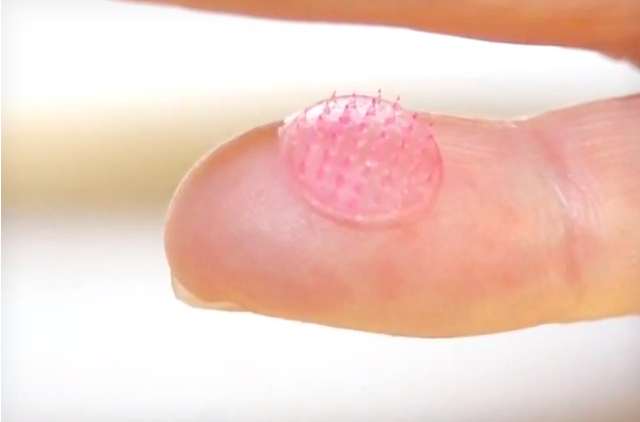 In a news post published just a few days ago, King’s College London announced that their scientists have successfully “demonstrated the ability to deliver a dried live vaccine to the skin without a traditional needle”. This research, and an injection-free vaccination, could be instrumental in the development of vaccines for HIV, malaria and tuberculosis.

The tiny disc, shown above, has several sugar micro-needles that dissolve when pressed into the skin. Compared to a traditional hypodermic needle, this method is a potentially painless alternative.

The main buzz about this discovery and the injection-free vaccination is that it may open up these live vaccines to the entire world. Furthermore, there is no need for refrigeration and the potential to reduce the cost of manufacturing and transportation is huge. This method also avoids the risk of transmitting blood-borne disease from contaminated needles and syringes.

Overall, this method signifies a huge advance in delivering vaccines for HIV, malaria, and tuberculosis. Hopefully we will be hearing more about the successes of this work and its application in the real world.

It’s all worth mentioning that this project was funded and supported by the Bill & Melinda Gates Foundation. One of the main goals of the Gates foundation is to support global health. The foundation gives approximately $800 million a year to global health. The following video is Dr Linda Klavinskis from the Peter Gorer Department of Immunobiology at King’s explaining the research behind the new technique and its wider potential.

Do you think that this is a big step in medicine? How do you think this will affect our fight against disease? Let us know in the comments below.