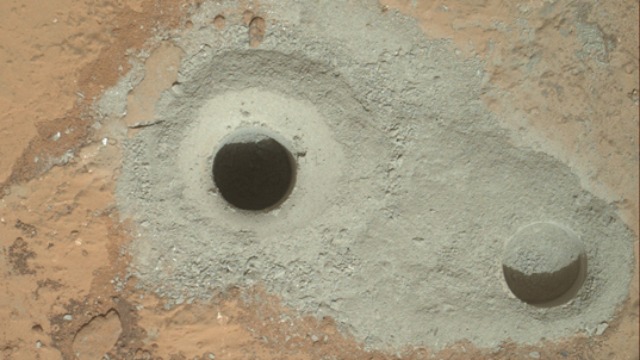 Last summer, the Curiosity rover touched down on the Martian surface and space geeks from around the world, myself included, rejoiced at the accomplishment. That little rover has been roaming around on Mars for the last few months and now it has drilled a hole into the Red Planet and collected some bedrock.

This is a pretty big deal. This is the first time that something man-made, as far as we know, has drilled into the bedrock on Mars to obtain a sample. Up until now, we’ve only literally brushed the surface or perhaps used some abrasion tools to get a little deeper. The hole is only about 2.5 inches deep and 0.63 inches wide, but this will give scientists access to the fine-grained sedimentary bedrock. This sample could reveal all sorts of secrets about the Martian past, including when it once had a wet surface.

We can’t expect to get some crazy results instantaneously, of course. Over the next few days, the Curiosity rover will need to blast off the internal surfaces of the drill bit with some Martian dust, ensuring that it’s not contaminating the sample with anything it brought along with it from Earth. After that, Curiosity and its instruments will example the sample and send those test results back to scientists here on Earth. After being put through a sieve, the super fine dust will then go through the Chemistry and Mineralogy (CheMin) and Sample Analysis at Mars (SAM) instruments for analysis.