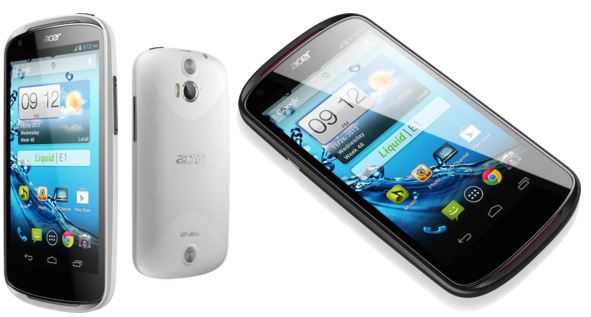 What are some of the specs you’ve come to expect from flagship smartphones that are going to be released in 2013? Perhaps it’s a 5+ inch display boasting a 1080p resolution. Maybe you want a super fast quad-core or even octo-core processor, backed by at least 2GB of RAM. Maybe you want to see a 12MP or better camera on there. Unfortunately, the newly revealed Acer Liquid E1 Android smartphone doesn’t have any of them. This is not a high-end smartphone at all.

Instead, you can probably better describe the Acer Liquid E1 as more of a mid-range device, the kind of phone that you’d be able to get free on a contract or perhaps offered for a reasonable price through prepaid. There’s a 4.5-inch qHD display, a dual core 1GHz processor, 1GB of RAM, 4GB internal storage, 5MP main camera, VGA front camera, and a 1760mAh battery. At least it’s rocking Android 4.1.1 Jelly Bean, but it’s missing out on the Android 4.2 action.

This isn’t necessarily to say that the Acer Liquid E1 is a bad smartphone, per se, but it’s hardly able to compete against the likes of the upcoming Samsung Galaxy S4. In fact, looking at those specs, it’s probably better equipped to compete with the Galaxy S2 from 2011. Let’s just hope it’s cheap. Then, all is forgiven.

What do you think, if the price is right would you be interested in a midrange Acer phone like this or not?