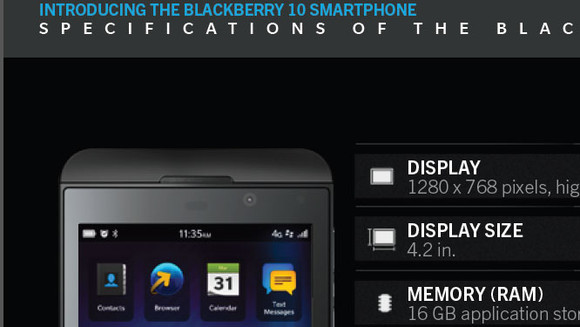 Research in Motion once dominated the smartphone battlefield with its BlackBerry series of products, but it has been pushed to the wayside by iOS and Android in recent years.

RIM is making a big push this year with BlackBerry 10 and now a leaked document from Waterloo is showing off all kinds of official details about the upcoming L-Series smartphone.

The official doc leaked from RIM looks like it is a presentation geared toward sales reps, educating them on the ins and outs of not only BlackBerry 10, but also the new L-Series touchscreen smartphone (which could launch as the BlackBerry Z10) itself. We’ve heard some info about this phone, but now we’re getting something more concrete. There’s a presentation slide with the BlackBerry 10 L-Series specs, for instance. It details a 4.2-inch 1280×768 HD display to go along with 2GB of RAM, 16GB internal storage and a 1800mAh battery.

Going on par with other major smartphones of the day, the BlackBerry Z10 will reportedly have two cameras: a 2MP camera on the front for 720p video calls, plus a 8MP shooter on the back with autofocus, 1080p video, 5x digital zoom, and LED flash. Connectivity brings the upcoming L-Series on par with other high end smartphones too, boasting NFC and 4G, along with the usual allotment of WiFi, Bluetooth and GPS.